Ella Grace Hartwell is a celebrity kid who grabbed media attention as the daughter of Keshia Knight Pulliam, an American actress and her ex-husband, Edgerton Hartwell, a former American football linebacker. Currently, the star kid is living with her mother as her parents separated in 2018.

When Is Ella Grace Hartwell's Birthday?

Ella Grace Hartwell was born in 2017 in the United States of America, making her 5 years old as of March 2022. She celebrates her birthday on 23 January every year. The American nationality holder belongs to the Black ethnicity and was born under the birth sign Aquarius.

The star kid was born as the only biological child of parents, Keshia Knight Pulliam and Edgerton Hartwell. Ella's half-siblings are Edgerton Hartwell Jr. and Sevynn Elise Hartwell. The little princess has black eyes and black hair. She is a school kid focusing on her kindergarten education.

A Peek at Hartwell's Personal Life

The five years old girl shares a healthy relationship with her family members. Talking about her parent's relationship, Keshia Knight Pulliam and Edgerton Hartwell got engaged on New Year's Eve 2015 and tied the knot the following day. However, their relationship couldn't last long. The pair legally divorced in April 2018 after the birth of their daughter, Ella Grace Hartwell on 23 January 2017. 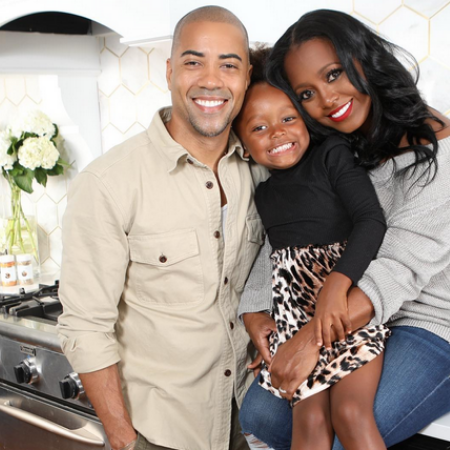 Ella's custody was given to her mother, Keshia. Additionally, Keshia filed a lawsuit against Edgerton multiple times for not paying child support money in time. It was reported that the former footballer needs to pay $3000 per month for Ella's upbringing. Also, the actress accused Edgerton of concealing his exact net worth.

Currently, the little girl's mom, Keshia, is in a marital relationship with actor Brad James. The beautiful pair exchanged vows in September 2021. On the other hand, Edgerton seems to be single at the moment. Previously, he married reality TV star Lisa Wu-Hartwell. The former couple walked down the aisle in 2005 and separated in 2011. Similarly, the former pair was blessed with Edgerton Hartwell Jr in 2007.

Hartwell's Mother Is a Millionaire

Ella Grace Hartwell is living a luxurious life with her mother, Keshia Knight Pulliam. The American actress has around $12 Million net worth. Her primary income source is her successful showbiz career. Pulliam bought a beautiful house in Fayetteville, Georgia, the United States, in 2005 for $506 thousand. The mother-daughter duo might be living in the same house currently.

The veteran actress has been active in the showbiz industry since 1982. She has 35 acting credits, 3 production credits and 10 archive footage credits as per her IMDb profile. Hartwell's mother is best recognized for movies, and TV shows like The Cosby Show, House of Payne, Madea Goes to Jail, Cuttin Da Mustard, The Christmas Aunt, My Brother's Keeper, Radio Christmas, The Love Letter, The Waiting Room, Death Toll and more.

Meanwhile, Ella's father, Edgerton Hartwell, has a fortune in the range of $250000- $1 Million. No doubt, he earned good money from his former football career. The 6 feet 2 inches tall footballer started his sports career in 2001. Similarly, he played for Baltimore Ravens, Atlanta Falcons, Cincinnati Bengals, Oakland Raiders, Las Vegas Locomotives, among others.