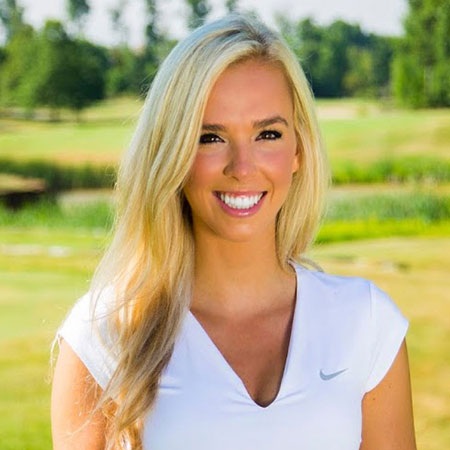 American model, YouTuber, golfer, TV reporter as well as a sports journalist, Elise Lobb is known for her modeling work and her social media presence. Besides her career path as a television reporter, she is also famous as Miss Daytona Beach which she won in 2014. She is also famous on social media like Instagram where she frequently shares her time with her fiance.

Elise Lobb was born on 31st December 1994, in the small town of La Jolla in California, and was raised in Jacksonville, Florida. Her birth sign is Capricorn. She holds an American nationality and belongs to the white ethnicity.

Elise's father is a former military which might be the reason she has huge respect for veterans and servicemen. She started playing golf at the age of 3 and later she also competed in numerous golf tournaments and won most of them.

Lobb graduated in sports journalism from the University of North Florida in 2013. During her time in the university, she engaged in several golf tournaments while she also worked as a part-time model side by side.

She also has achieved success in as a model; in 2014, she was crowned Miss Daytona Beach. Also, she was featured on golf magazines and completed independent shoots with other companies as well.

On 8th July 2011, Lobb joined YouTube with a self-titled channel and has around 14k subscribers so far. Some of her most viewed videos are House Tour: Waste Management Golf, and DIY Last Minute Halloween Costumes and Treat!!!

As of 2019, she works as a co-host for the FOX Sports’ program Swing Clinic.

Elise Lobb has not revealed her net worth to the media yet, however, she has undoubtedly earned a good amount of money from her career as a model, golfer, host, and YouTuber.

In Addition, her YouTube channels have more than 14k subscriber as of March 2019. She also makes a handsome amount of money from her YouTUbe videos and the ads featured in the videos.

You May Like: 1.83 m Tall American Golfer Patrick Reed's Earning From His Profession and Net Worth He Has Achieved.

Elise Lobb’s Personal Life; Who Is Her Boyfriend?

Elise Lobb, aged 24 (2019) is in a relationship with an American professional ice hockey player, Ryan Dzingel. However, the detailed information about how and when they met and began their relationship is not in the media yet.

Exploring her Instagram account, we come to know Dzingel proposed Elise on a romantic way on January 26, 2019. Furthermore, the pair is yet to reveal when they are getting married.

Besides, she loves to read books in her spare time.

Also see, Golfer Lucas Glover's Wife Arrested For Attacking Him And His Mom After His Bad Performance.