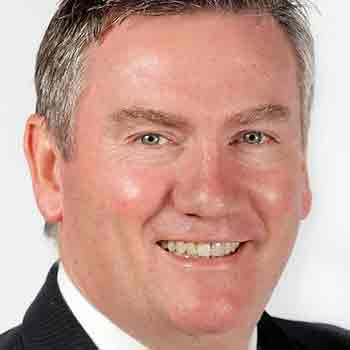 Australia’s one of the most accomplished, versatile, and talented television personalities, Edward Joseph McGuire, in short, Eddie McGuire is the current president of Collingwood Football Club and Melbourne Stars Twenty20 cricket franchise. He is also the host of the show called Millionaire Hot Seat from Channel Nine Program. He also co-hosts the Triple M Melbourne’s breakfast show called The Hot Breakfast with Mick Molloy and Luke Darcy as well as he is the Australian Rules football for Fox Footy.

Regarding his personal life, he is married and has two children together.

Eddie McGuire was born Edward Joseph McGuire in the year 1964 on October 29 at Broad Meadows, Victoria, Australia under the birth sign Scorpio. McGuire is Australian as per nationality and as far as his ethnicity is concerned, he is White.

McGuire is the son of Bridie Brennan and Edward McGuire Sr. His parents raised him with his older brother Frank McGuire (who worked as a sports reporter) in the working-cla s s Melbourne suburb of Broad Meadows.

Regarding his academics, he along with his older brother went to the Christian Brothers College as they both were selected for the scholarship. It was his older brother who helped him to get his first job in media as an Australian Rules football statistician and cricket reporter for The Herald through his contacts.

Later, he became the cadet sports reporter for Network 10, and in 1993; he was transferred to Nine Network as the host of a sports variety program.

In 1994, Eddie McGuire became the host of the Footy Show for the Nine Network where he remained on the show till 2005. He also hosted the Australian edition of Who Wants to Be a Millionaire until 2006.

McGuire worked as the football radio caller for Triple M, which was basically focused on Rock Music. He then hosted the annual Australian Logie Awards show in 2003, 2004 and as a co-host in 2005. He was the host of the Sydney New Year’s Eve 1999-00 telecast.

Eddie McGuire has been the name behind the success of Channel Nine as his hosting for Friday Night Football was a huge success. In 2006, it was announced that Eddie McGuire would be the new CEO of the Nine Network for the vacancy due to the departure of David Gyngell in May 2005.

In May 2007, McGuire announced his resignation from being a CEO for Nine Network and officially resigned as CEI on June 30, 2007. He said he would like to take on a new position in programming services as well as in on-screen roles.

Following his wish, he returned to the TV screen in January 2007 hosting the Australian version of the quiz show 1 vs 100. His hosting roles grabbed the views of an international flavor as he temporarily hosted for the show “A Current Affair” in 2007 in absence of Tracy Grimshaw making the 1.42 million viewers tuning the show in the first night of his hosting.

The rival program Today Tonight still beat the Nine’s show “A Current Affair” with 1.470 million viewers. He also hosted a telethon for victims of Victorian bushfires in 2009. In the same year, he had hosted a show called Millionaire Hot Seat program which was the weeknight game show.

Talking about the shows he hosted several of the events and programs including the Australian Formula One Grand Prix, the opening of Melbourne’s world-renowned Crown Casino, The National IQ Test, etc.

Recent programs that Eddie had hosted are 45th, 46th, and 47th Annual TV Week Logie Awards which was tuned by more than two million viewers.

Besides, McGuire is also a writer. He has written two bestselling books called Pants: The Darren Millane Story and Footy Show Screamers.

Eddie McGuire has been honored for his works and his contribution service to Australia by the award of Member of the Order of Australia 2005 and Australian Sports Medal in 2001. As an honor from RMIT University, he was awarded as the honorary doctorate in Communications honoris causa and also as a member of the Australian Government’s Social Inclusion Board for a period. McGuire is also nicknamed “Eddie Everywhere” for his one-time near-ubiquity in Channel Nine programming.

As of 2018, Eddie McGuire has an estimated net worth of $55 million dollars as per some online sources, but, the amount is still under review. Moreover, he earns a salary of $3.5 million.

McGuire owns a grand mansion in the Victoria suburb which he bought for $11 million. Besides, he is also involved in several charitable activities. With such earning, he is living a lavish lifestyle.

Eddie McGuire is a married man. He is married to Carla McGuire after dating for months. The now husband-wife couple met for the first time at a mutual friend's party. They had a love-struck and eventually started dating.

On 8th February 1997, the pair tied the knot in a lavish ceremony at St Peters Church, Toorak Road. Many of McGuire's fellows attended the wedding including Tara Brown, Steve Jacobs, Kellie Sloane, and Larry Emdur among others. They are together for years without any rumor about their divorce.

The couple shares two children, two sons named Joseph McGuire and Alexander McGuire. Their first son, Joseph was born in 2001 whereas the second was born in 2003. Moreover, his second son made his screen debut in 2016 in the Australian soap opera, Neighbours where he portrayed the character of Charlie Hoyland.

Eddie McGuire once had been in a controversy of racism when a 13-year old Collingwood fan racially called “ape” to a player of Sydney Swans. He had stated that Collingwood has zero-tolerance for racism but the 13-year-old girl does not know the word is a racist slur. He had to apologize twice for the incident.

Nevertheless, the controversy was huge at that time, Eddie ended up crying to expose the happiness as the Collingwood ended up winning the tournament then.

Check out the interview video of Eddie McGuire: