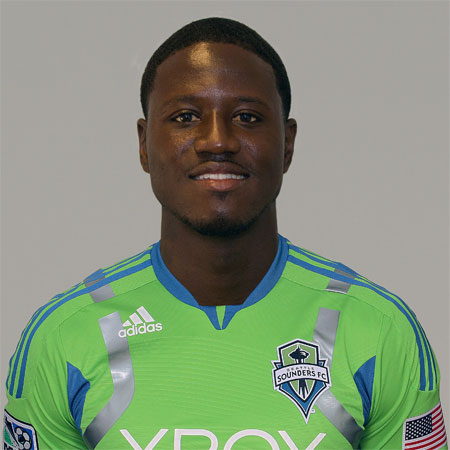 Eddie Johnson, full name Edward Eddie Johnson is an American footballer who is playing for the current team of D.C. United and the National team of Nation USA. He was born in March 31, 1984 in Bunnell, Florida, United States. He plays as striker or Forward for his team.

Johnson made History becoming one of the young Players of his age Group to sign with Major League Soccer.  He was taken by Dallas Burn as a Project-40 player in the 2nd round of the 2001 MLS SuperDraft. In January 2005, Benfica offered  5 million dollar transfer fee for Johnson but, he himself and the league rejected the offer.

Because of Salary problem with Dallas, Johnson was sold to Kansas City Wizards on February 14,2006. In January 2008, he was transferred to Fulham, and again signed a contract to extend until summer 2011. He was loaned to Championship side Cardiff City on 2008-09 season. He made his debut for the club in a victory against Milton Keynes Dons on August in the Football League Cup. On 31 December, 2009, Johnson moved to Greek side Aris Thessalonki on the loan for 2009-10 season. Johnson made his debut with the club in a 79th minute substitute in a victory over Asteras Tripoli F.C. On January 31, 2011, he was loaned to Preston North End , a Championship club . On December 22, 2011 , it was rumored that Johnson signed with Primera Division de Mexico club Puebla. Though, Johnson never officially signed for the club. On February 17,2012 , Johnson signed with MLS and was selected on February 18 but was immediately  traded to Seattle Sounders FC exchanging Mike Fucito and Lamar Neagle. He was also selected to the 2012 MLS All Star Team by Coach Ben Olsen.On the end of MLS season , Johnson sold to D.C. United on December 17,2013. He Started playing for D.C. United since then.

Johnson was successful at the Under  17 level soccer, he scored 23 goals in 25 appearances and leaded the team in scoring both 2000 and 2001. He also successfully played in Under 20 level, and in 2003 at the FIFA World Youth Championship in the UAE he scored 4 Goal and won the tournament’s  Golden Shoe as the top scorer. He appeared in two matches at the 2006 FIFA World Cup and also playe din 2007 Copa America and the 2007 Gold Cup as well. He was also named for the squad in 2010 FIFA World Cup. He also scored in the Qualifier match for soccer world cup 2014 organised by FIFA.

Johnson’s Spouse is Janelle Johnson. He has a daughter in the name of Children.Johnson became Christian at the age of 18. He considered Romario as his favorite player since his childhood. He supports Manchester United.

Johnson is 6 ft taller in Height and  has 82 kg body Weight. His Images can be found in internet. He has been transferred to many club in the Transfer Market.

With the National team of United States, they have won CONCACAF Gold cup twice, in 2007 and 2013.

Individually he has been awarded with MLS Comeback player of the Year in 2007 and 2012.