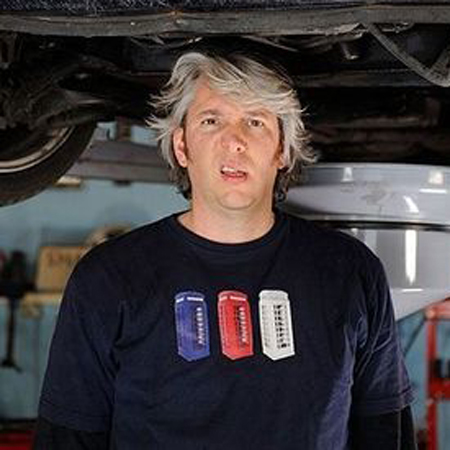 Edd China is an English TV presenter, motor specialist, inventor and mechanic best recognized from the Discovery Channel show Wheeler Dealers. He worked in the show from 2003 to 2017.

China is happily married to his longtime girlfriend Imogen China. Despite being married for a long time, the pair have no children till now.

Ed China was born Edward John 'Edd' China on May 9, 1971, in London. He is of Caucasian ethnicity and holds British nationality.

He attended King Edwards's School, Witley in Surrey. With interest in cars and mechanics from a young age, China pursued a course in the same field, graduating with a degree in engineering product design from London South Bank University. His first major project was Casual Lofa(driving sofa) which he built to raise money for a Raleigh expedition to Belize, while at the university. He also set his first Guinness World Record of fastest furniture with that creation.

In 1994, Ed China got his first job in television working as a special effects technician on Father Ted. Following the success as a technician in the show, in March 1999 he opened up Cummfy Banana Limited, an outlet for his creations and world record attempts.

In 1998, he appeared as a guest on Top Gear Live where he drove the Casual Lofa at the Silverstone Live Arena. His creation got so popular that it featured on Jeremy Clarkson's DVD The Most Outrageous Jeremy Clarkson VIdeo In The World ...Ever! Also, over the years, China made three appearances on Channel 4's The Big Breakfast driving the Casual Lofa, Street Sleeper and Bog Standard.

Also, watch the amazing car collection of Edd China in the video given below:

In 2000, he guest starred in an episode of Scrapheap Challange(Junkyard Wars in the U.S.A) featuring driving beds and sofa cars. The same year he appeared in TV show This Your Life featuring Suggs, during which China gave a ride to presenter Michael Aspel, around old haunts and finally dropping him to the studio on the Casual Lofa.

In 2002, China was part of Build a Bond Car On A Budget, a feature of Top Gear, during which he modified a Rover 800 bought for ’┐Į200 with a Bond-esque gadget like an ejection seat for just ’┐Į100. In 2007, he featured in many shows including Fifth Gear, This Morning and Pulling Power, where he showed his creations owing to his Guinness World Record attempts.

Along with Penny Mallory, Alex Riley and Tony Mason, China presented a TV mini-series called Classic Car Club, broadcasted in Discovery Channel, a show for classic car ethusiasts about the history and culture of classic cars.The show premiered in 2005.

From 2003-2017, China along with Mike Brewer hosted the Discovery programme Wheeler Dealers. He quit the show due to the disagreement of the direction of the program and shared the news via his YouTube channel on 21 March 2017.

China holds Guinness World Records For the fastest shed, bed, toilet, milk float and the largest motorized shopping trolley. He owned a servicing garage and an MOT in Bracknell, Berkshire called Grease Junkie which later closed down in August 2016 due to his busy schedule. It was reopened as Motest in April 2017.

Edd China married his longtime girlfriend, Imogen China in a closed ceremony attended by friends and family. The exact date of their wedding and details of how they met is yet to be made public, but according to sources they shared a longterm relationship before tying the knot.

So far, the couple doesn't share any children. They seem happily married and often spotted together in public places.

Edd China has accumulated an estimated net worth of $1.5 million as a TV presenter and motor specialist. Appearing on various Discovery Channel shows, on an average, he collected a salary of ’┐Į74,032 per year.

His self-titled YouTube channel has more than 273k subscribers with an average view over 10 million. The channel adds more to his income.

Also, he is the managing director of Grease Junkie and Cummfy Banana Ltd.