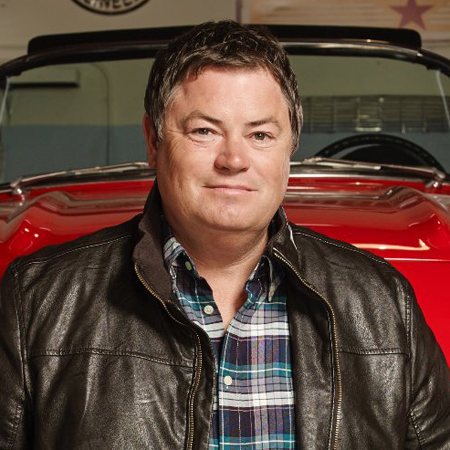 Mike Brewer is famous as the television presenter of motoring TV programmes. He currently serves as a presenter of international hit TV car show ‘Wheeler Dealers.' Previously, he hosted Driven for Channel 4, Deals on Wheels, and Pulling Power as well.

Mike Brewer was born in Lambeth, London, England, on August 28, 1964. He holds British nationality and regarding his ethnicity; he is Caucasian.

Brewer is the son of Roger Wilks and Doreen Fitzgerald. His father was the owner of Ford Popular called ‘Pinball Wizard.’ He used to customize vehicle which helped Brewer find his pa s sion for motoring as a teenager.

In 1997, Brewer started his career hosting the show Deals on Wheels. Soon after, he began working as a presenter on Driven for Channel 4, followed by Pulling Power, Auto Trader, Wrecks to Riches, and Revved-up.

Currently, Brewer serves as a presenter along with Ant Anstead for Wheeler Dealers. The show is airing on the Discovery Channel since 2003. He and Edd China hosted the show until the end series 13.

Brewer has also worked as the host for Wrecks to Riches, Pulling Power, Auto Trader, and Remote Madness as well. He received the Royal Television Society Midland Center award for Best In Vision Personality.

Mike Brewer is married to Michelle Brewer, his wife since 2002. The couple is blessed with a daughter, Chloe. She is currently studying fashion communication and promotion.

The couple started dating in 1990 and decided to get married after more than a decade of their relationship. They celebrated their 15th wedding anniversary in March 2017. Mike tweeted about his anniversary via Twitter; ''Happy Anniversary to my amazing wife, 28 years together 15 married''.

They are currently living in London along with their daughter. Mike also is active on social media like Twitter with more than 125k followers.

Mike Brewer from his TV career and a car dealership have garnered an estimated net worth of around $1.5 million according to Celebrity Net Worth.