Dylan Kingwell is a rising talented Canadian actor who grabbed international attention for portraying the role of Victor on the A&E’s The Returned. The young actor is also famous for appearing in series like A Series of Unfortunate Events and The Good Doctor.

How Old Is Dylan Kingwell?

Dylan was born on 6th July 2004 and is almost seventeen years old. He was born in Vancouver, British Columbia, Canada, and belongs to Canadian nationality. His birth sign is Cancer.

Dylan has five members in his family. He grew up with two sisters, a younger and another older, Kayla. There is nothing talked about her parents, but, as per sources, Dylan would often go with his mother to Starbucks, where he would introduce himself to strangers. 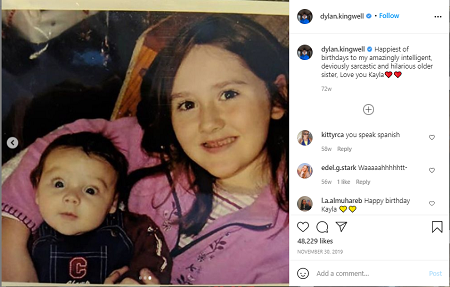 Dylan is 5 feet 7 inches tall and has a weight of 60 kg. He has a slim body build. His eyes and hair color are brown.

Dylan got a chance in his first commercial for Hasbro for Candy Land Castle. The young actor has been involved in the acting career since the age of four. He has appeared in multiple national and international commercials.

In 2011, Dylan appeared in the telefilm To the Mat, where he portrayed the role of the son of Daniel Cudmore’s character, Jordy Sloc u m. In 2014, he also appeared in a minor role in the 2014 movie Big Eyes.

Dylan first appeared on the big screen in 2013, where he portrayed the role of Little Boy in the fantasy drama The Young and Prodigious T.S. Spivet. He then guest appeared in an episode of The Tomorrow People.

In 2014, Dylan appeared in the short movie Soldiers of Earth, and the following year, he appeared in the role of Victor in the French series Les Revenants. In 2015, he worked in three Christmas-themed telemovies Ice Sculpture Christmas, The Christmas Note, and Wish Upon a Christmas.

In 2016, Dylan appeared in a telefilm, The Wilding. He portrayed the role of Arthur Henderson in the telefilm Campfire Kiss and appeared as Sean Keegan in Escape from Mr. Lemoncello’s Library. He is famous for portraying the role of Steve Murphy in the medical drama The Good Doctor.

Dylan grabbed worldwide attention when he appeared in Netflix’s black comedy-drama A Series of Unfortunate Events.

It has been almost a decade since Dylan started his career in the entertainment field. He has worked in numerous telefilms, television series, and commercials earning a high figure of money.

As of 2021, Dylan Kingwell’s net worth is reported to be around $400 thousand. For his marvelous acting performance, he won Joey Award for the Best Young Actor in TV Series Drama in 2016.

It is not clear when Dylan and Lola started dating, but they look happy together.