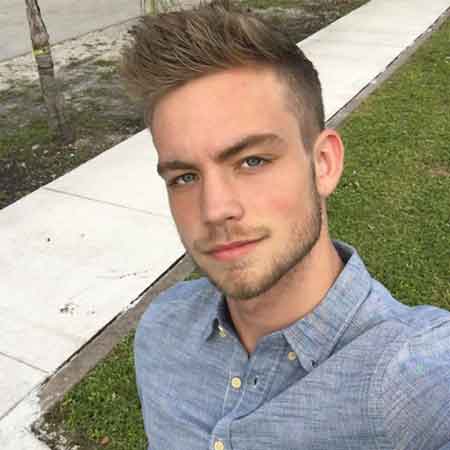 Dustin McNeer is a professional model who came into the limelight after appearing as a contestant on the 22nd season of America's Next Top Model: Boys & Girls. He is signed to Next Model Management Maimi and has modeled for top brands like Calvin Klein and Hollister.

Dustin Mcneer was born on May 28, 1997, under the birth sign Gemini in Kernersville, North Carolina. He was raised in Lewisville and enrolled at Forsyth Country Day School. During his time at the school, he was a member of the school's wrestling team and continued wrestling for six years.

Mcneer was a gymnast and can do cartwheels very well. However, his interest changed into modeling and began modeling from his high school days. Mcneer and family afterward moved to Florida. He holds American nationality and his ethnicity is White.

The detials of his parents and siblings are yet to be disclosed.

Dustin Mcneer is a professional model who got his first modeling project from a top brand named Hollister and with the team, he modeled for their jeans. Then he, later on, was signed by Calvin Klein for their project.

His breakthrough decision in his career was when he entered the American's Next Top Model season 22 competition where he got his fair share of the limelight. In that particular season, both girls & boys could participate and were joined by models Justin Kim, Ashley Molina, Stefano Churchill, and Hada s sah Richardson.

The show was hosted by supermodel Tyra Banks, Kelly Cutrone, J. Alexander, and Nyle DiMarco won the season. He didn't win and was the third contestant to get eliminated. After his appearance on the show, he was signed to Next Model Management Miami (ANTM).

As for the future career goal, he wants to pursue a career in acting but hasn't been cast in any movies or Television projects yet.

Dustin McNeer's Net Worth And Salary

The model Dustin McNeer's net worth according to some online sources is believed to be around $1 million. He is a model who has done modeling projects for top brands like Hollister and Calvin Klein and considering that we can a s sume his net worth to be in thousands of dollars.

As a professional model, McNeer is paid around $101,00 a year. The model has also a huge fan following on his Instagram account. It is also the major part of his net worth.

ANTM famed model Dustin Mcneer is not married and not in a relationship with anyone at the moment. He seems to live a quiet life away from the media and doesn't share much about his romantic relationships with the public. There are no rumors about his both past and present link-ups.

In November 2013, the model uploaded the photo smooching an unknown girl on his Instagram account. After that, many of his fans started a s suming that she was his girlfriend. But finally, the rumor was never confirmed by them.

The model is rumored to be gay and there are articles about him written in various gay blogs like The Gay Times. However, he has never really openly admitted his sexuality.

He is very popular on social media sites and has around 35.2k and 409k followers on Twitter and Instagram respectively as of 2019. McNeer has a toned body and has a charming appearance that can make anyone's heart flutter.

Here is a video of Dustin Mcneer giving an interview for the YouTube channel, The HR Show Experience.