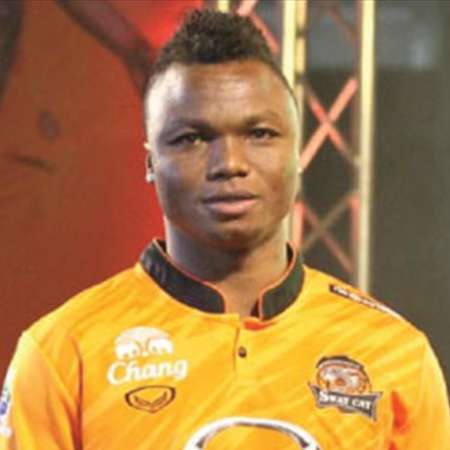 The Ghana Player of the Year 2010, Dominic Adiyiah is a Ghanaian Footballer who made football his passion while he was very young and in short period was able to earn many honors through his unparallel football traits. At the moment Dominic plays for his current team Arsenal Kyiv.

Born on November 29 , 1989 ,in Ashanti Region in the nation, Ghana, Dominic Adiyiah started his youth career from the Feyenoord, Academy located in Gomoa, Fetteh when he just 10 years old. Dominic then remained in the academy for 7 years and sharpened his football skills. Adiyiah was later transferred to Heart of Lions based in Kpandu in January 2007. While debuting in the Ghana Premier League at the end of the 2007-08 seasons, he managed to get a title of the Most Exciting Player of the League.

Adiyiah moved to Europe on August 2008 upon being signed into the Norwegian top Flight club Fredrikstad in a minimum fee of 125 thousand Euros. His debut for the club was a match against Aalesund on 30th August, which was followed by four more scoreless appearances in the season. The team however, finished second in the league.

After a fruitless season however, he scored twice in the training camp in the upcoming season, but didn’t do so in the upcoming four league matches. His debut in the Europa league was against Lech Poznan in the second leg of the third qualifying round.

His international career and the impressive performance he delivered for the nation in the U-20 World Cup affected his club career positively as he was signed into the European Serie A club Milan after much speculation. Fredrikstad also went on to announce that a bid of 500 thousand Euros was made for the transfer of this striker. The rumor was confirmed by Adriano Galliani, CEO of Milan, and the signing took place on 7th November after Adiyiah passed the medical tests.

Dominic’s main position is right wing and his secondary position is left wing and center forward. Upon being called to play in the African Nations Cup, by the Ghana National team, he was unable to play for the club. After securing an Italian work permit a month later, he became eligible to play, however did not do so during the 2009-10 season. Adiyiah was sent also to Serbian Superliga club Partizan on a loan deal that lasted until the end of the season. The 2011 summer transfer window brought him a loan deal with Karsiyaka. Adibiyah was called back into Arsenal Kyiv from Karsiyaka owing to the lack of playing time. His three year contract with Arsenal Kyiv ended on 25th June, 2012, also bringing an end to his contract with AC Milan.

Dominic also played the Ghana national under 20 on 30 March in a match against Niger. Dominic was also seen participating in the WAFU under 20 Championship. Successively in the next year Dominic was included in the squad that won the African Youth Championship. The year 2009 had much more to give him and on October, Dominic took part in the under 20 World Cup which was held in Egypt. Dominic played very well and thus was awarded with the Golden Shoe as a top scorer delivering 8 goals in 7 games. Not only that, Dominic was also named the Most Valuable Player of the entire Tournament. By then Dominic was recognized by many and had huge number of fans.

On November 3 2009, Dominic Adiyiah was called up by Ghana National football team for the World cup qualification which was against Mali. But he was however not used in the match. He made his senior football debut in a friendly match against Angola, three days later.2009 ended with a FIFA under 20 World Cup Golden ball, Golden Shoe and CAF Young Player of the Year in his hands. Dominic took part in the African National Cup with his national team in January 2010 which reached the finals.

With a height of 172 cm and a weight of 71 kg Dominic had already carved a part of his career. Although his salary is unknown his current market value is 704 thousand pounds. World Cup came to be a part of his football career in June of 2010 which was held in South Africa itself. He made his World Cup 2010 Debut in a game against Germany. Dominic was later sent on in the quarter finals against Uruguay. By the last minutes of the extra time Dominic made a header but could not score a goal. Although Ghana was given a penalty shot .Dominic took the fourth penalty with his team sprawling with2-3, but had his shot saved; fellow player Sebastian Abreu apprehended the chance by scoring the settle on penalty for Uruguay. However 2010 turned out good for Dominic when he earned the Ghana Player of the Year. Recently since January 1 2014 this legendary under-20 player is said to have been unemployed.