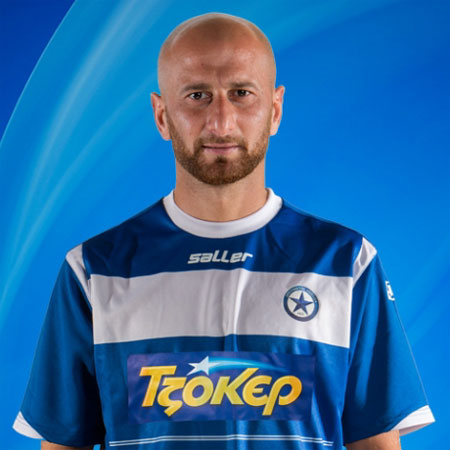 Dimitrios Papadopoulous is a well known Greek footballer who at present plays for Atromitos in Siperleague Greece. He was born on 20 October 1981 in Gagarin, Soviet Union. He is also a part of Greek national Team. He wears Jersey No.11 and plays as a Forward for the team. He is also the top scorer in his current team with 14 goals.

Dimitrios started his carrer with the team Akratitos. He debuted in 1999 and played an important part in promoting the team to Alfa Ethniki in 2001.The next team he played for was Burnley in England. He was with Burnley for two seasons. He moved to Panathinaikos in July of 2003. In his very first season there he became the star of the team; he became the topmost scorer in 2003-04 seasons with 17 goals in 26 games. The team won its first ever Greek Championship with Dimitrios. Which otherwise was dominated by Olympiakos for almost ten years. He signed a three year contract in the 2006 summer. On 13 November 2008 he was signed by Serie A club Lecce in a free transfer. His first goal for the club was on 19 April at the Stadio Olimpico against A.S Roma. Dinamo Zagreb signed him for three years on 26 June 2009. He cost the Croatian team 650,000 Euros annually. Dimitrios scored goals helping Dinamo Zagreb go ahead in the Croatian cup and also in the victory at Croatian League. He was in the team Celta Vigo from 22 January 2010 to the end of the season. He couldnot score any goals in Celta Vigo and was also injured because of which he couldnot play regularly, this put pressure on him to leave the team. He was loaned to Levadiakkos on January 2012. He couldnot score any goal for the team in Greek Super League. Nevertheless, the team finished seventh.Dimtrios moved to Panthrakikos in summer 2012. He debuted for Panthrakikos with a goal against his former club Panathinaikos, getting him current team to win the match. He led his team to the semi-finals of Greek cup. While in Panthrakikos he got his firm back and scored back to back goals. He got named as the best player of the Super League. He became top scorere of the teams with 11 goals to his credit. He was signed by Atromitos for 2 years in the summer of 2013. Atromitos is a celebrated team who got fourth in the 2012 Greek Super League. He made his first goal for the club on 17 August 2013 against Ergotelis. The match was a draw. By the end of 2013/14 seasons he has scored 14 goals which make him the highest scorer of the club.

His marriage or any romantic details have been kept private. He is a well built 32 years old player with a height of 1.78m and an appropriate weight.