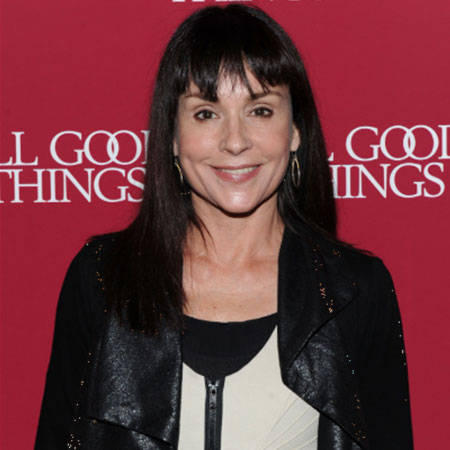 Diane Venora is an American stage, film and television actress. She made her acting debut in 1981 in Wolfen. Similarly, the actress' performance in 1988 American biographical film, Bird earned her a New York Film Critics Circle, for Best Actress and Sant Jordi Awards, for Best Foreign Actress. Besides, her other popular works include The Young Girl and the Monsoon, Megiddo: The Omega Code 2, All Good Things, A Midsummer Night's Dream, Grey's Anatomy, and so on.

Diane Venora was born on 10th August 1952 in East Hartford, Connecticut, U.S., under the birth sign Leo. She was one of the six children of her parents, Marie Venora, and Robert P. Venora who was of Italian descent and ran a dry-cleaning business.

Moreover, she also studied music at the Boston Conservatory of Music for two years. Then, she obtained a degree from the prestigious Juilliard School in New York City (1977), in a scholarship.

Diane Venora started her acting career in 1981 in the theater with a role in the ‘Off-Broadway’ play ‘Penguin Touquet.’ She is one of the first females to play a lead role in ‘Hamlet' at the New York Shakespeare Festival’ in 1983.

Afterward, she played the title role of ‘Hamlet’ on various occasions. She is best known for breaking the gender stereotype in Shakespearean theater and proved herself as one of the finest actresses.

Venora’s first on-screen credit came as Melanie in 1980 TV short, Getting There. The following year, she made her entry in Hollywood from the 1981 American crime horror film, Wolfen, alongside Albert Finney, Reginald VelJohnson, and others.

In 1984, she portrayed the character of Gloria Swanson in the American crime-drama film,  The Cotton Club, starring Richard Gere, Diane Lane, Nicolas Cage, and many others. Further, she won the New York Film Critics Circle, for Best Actress, and Sant Jordi Awards, for Best Foreign Actress for her role Chan Parker in 1988 American biographical film, Bird.

Also, Venora also appeared in the number of TV series such as Cook & Peary: The Race to the Pole, Great Performances, C.S. Lewis: Beyond Narnia, Law & Order: Special Victims Unit, Private Practice, and Grey's Anatomy, among others. Also, she has a recurring role in Thunder Alley and Chicago Hope.

From 1995 to 2010, Venora has made her notable roles in the number of movies such as  Three Wishes, The Substitute, The Jackal, The Young Girl, and the Monsoon, Megiddo: The Omega Code 2, Follow the Prophet, The Ministers, and All Good Things among others.

Diane Venora has not revealed her actual income, however, considering her name and fame in the industry, it can be easily estimated that Venora has acc u mulated the net worth in millions. According to genuine sources, the actress has a net worth $1 million.

The average income of actress in the United States is between $45,576 and $67,526 as per salary.com. She is likely to earn more than an average salary because of her experience and talent in the field.

The actor has worked in a number of hit movies and TV shows. In 1997, he landed the role in a movie The Jackal which was turned out to be a biggest hit at the box office racking up over $159.3 million worldwide against a $60 million budget.

Diane Venora is probably single at the moment. Prior, she was married to Polish cinematographer, Andrzej Bartkowiak, with whom she met while working for a commercial for ‘Head & Shoulders’ shampoo. Their relationship lasted from 1980 to 1989.

The former couple shares a daughter Madaket Bartkowiak. She quit show business to spend more time with her daughter who was eight years old at that time.

Madzia has suffered from a degenerative nerve condition and partially deaf which made her more dependent on Diana. During that period, she lived in New York and worked with underprivileged children while spending time with her daughter.

The actress, however, made occasion theater appearances in New York till her daughters' health improved and they shifted to Los Angeles. In 1994, she made her comeback after her daughter slowly gained confidence on her own.

Her husband got remarried later but offered to help with the upbringing of their daughter. However, Diane preferred to stay single and took care of her daughter.