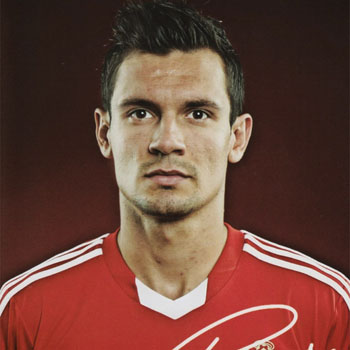 Dejan Lovren was born in Zenica, Yugoslavia, at present, Bosnia Herzegovina from the Croatian parents. Although born in Bosnia, he is a Croatian citizen as his parents migrated to Croatia during the war. His date of Birth (DOB) is 5th July 1989. This 24-year-old young guy is an excellent Croatian Central defender with squad number 5. He uses his right foot in tackling the balls. Dejan is a young, handsome and energetic man of height 6ft 2 in (1.85m) and 84kg of weight. He is still a bachelor. His salary in 2012 was mentioned to be 1.56 million Euro. and his market value is 12,000,000 Euros. As of 2018, his net worth is $9 million with an impressive salary $3 million. His current market value is 20,00 Mill. €. His highest market value 20,00 Mill. € in 2014.

Dejan Lovren started his career from 2006 playing in the senior squad of Dinamo Zagreb from 2006-2010 where he was loaned to Inter Zapresic club for two seasons in 2006-2008. At this time, he was featured in 50 league matches and scored a goal against NK Osijek. After his return from loan, he played regularly for Dinamo appearing in 38 matches bagging three goals. Also, in 2009-2010, he played in 4 matches in UEFA Champions League Qualifiers. Dejan Lovren started playing as a substitute in Croatian National team from 2009.

From 2010 January till 2013, he started playing for French Ligue 1 club called Olympique Lyon. During this time duration, he gradually established himself as the first team regular starter as a Central defender whilst playing as a left or right full-back, proving himself as a versatile defender. Currently, Dejan Lovren plays for Southampton. He has signed a four-year contract with Southampton in 2013.

This amazing defender, Dejan Lovren, has played the total of 247 matches representing his country and through clubs bagging 10 goals in his name. His skills in passing the ball and ball interception are very appreciable, however; his weakness is considered to be the discipline. In between this duration of his career, the club Dinamo Zagreb won the Croatian Championship in 2005-2006, 2008-2009 and also bagged the Croatian Cup in 2009. When he was loaned to Inter Zapresic, he honored the club with the 2. HNL champions: 2006-2007. Whilst playing from Olympique Lyon, the club bagged “Coupe de France” in 2012.

Honors and success always come with the hard labor and some sacrifices. Dejan Lovren had Malleolar injury in 2011/2012 and 2013/2014, according to the injury history and suspensions based on media reports. In 2013/2014 English Premier League, he appeared in 29 matches bagging 2 goals in his name, assisting a goal and giving 19 goal shots.

Besides being well known as the Central Defender of Croatian national team and Southampton, Dejan Lovren is also popular for his fashion brand “Russell Brown” in association with Lovro Krcar, website: Russell-brown.com. This fashion brand is based in Croatia which has employed 8 people including two designers. Dejan Lovren can be followed on Twitter, Facebook, and on Instagram.