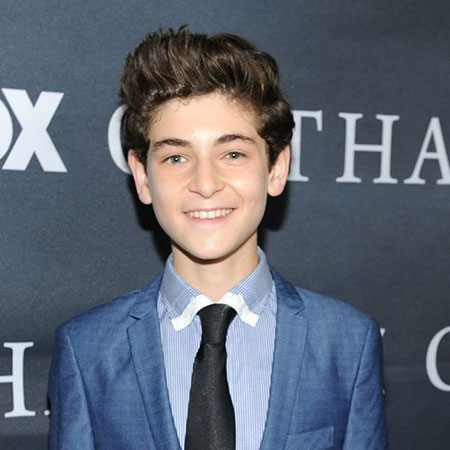 David Mazouz is a young American actor, known for portraying as a young Bruce Wayne on Fox's series, Gotham.  One of the most prominent characters he played on screen was as Jacob Bohm on the short-lived television series, Touch along with Kiefer Sutherland, Gugu Mbatha-Raw, David Mazouz, Danny Glover and few others.

Mazouz was nominated for the Young Artist Award for his role in an American drama television series, Touch. He also played Hudson Rivers in the TV movie, Dear Dumb Diary.

David Mazouz was born as David Albert Mazouz on February 19, 2001, in Los Angeles, California. Ethnicity-wise, he is White and holds an American nationality.

Mazouz was born to French father, Michael Mazouz; a physician & American mother, Rachel Mazouz; a psychotherapist. He grew up with his sister, Rebecca Mazouz.

Mazouz went to Shalhevet High School, a Modern Orthodox Jewish school, since 2015.  He was highly interested & dedicated towards acting field from his early age and appeared in a music video promoting the school.

David Mazouz began his career in the entertainment field with a commercial alongside Kiefer Sutherland, at the age of eight. He debuted with the Amish Grace series as Andy Roberts.

After a year, Mazouz portrayed as Timmy in short movie, coming & Going. He then made an appearance in numbers of films and television series.

However, he came into limelight after appearing in the series, Gotham as Bruce Wayne/main cast. Likewise, in 2013, he got the nominee of the Young Artist Award for her role, Jacob Bohm in the series, Touch.

More recently, Mazouz has appeared in the television series, Dear Dumb Diary 2: We h8t school and is still working on the tv show, Gotham.

David Mazouz has not involved in an affair till the present context. He is currently focused on his career and has avoided being in the relationship.

Mazouz has thousands of followers mostly girls who want to know about his girlfriend. However, he has kept his personal life away from the limelight and is giving time to professions.

One of the prominent names in the film industry, David Mazouz earns a good amount of money from his acting career. As of 2017, his estimated net worth is $0.7 million.