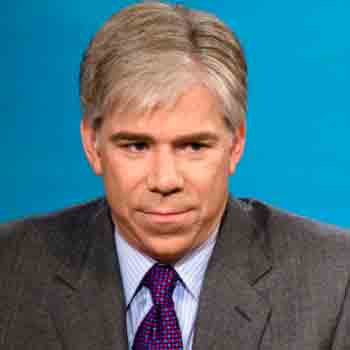 David Gregory, full name, David Michael Gregory is an American television correspondent and former moderator for NBC News Meet the Press, a Sunday morning talk show. He also has worked on various NBC News shows as a substitute anchor and host. He holds the great reputation in NBC as he was named the senior White House correspondent for the Network in 2001 and had been near to the then-president George W. Bush.

David Gregory, born in the year 1970 August 24 at Los Angeles, California, has reached the stardom in the journalism area at a very early age. He is the son of an account manager Carolyn Surtees and Don Gregory, a film and theatrical producer. He is half Jewish. He was raised as Jewish so he is a practicing Jew today.

Having been born from the parent Don Gregory, a film and theatrical producer, speculated that he would be active in entertainment world like his father but he became active in the real world of Journalism where everything deals with study and reports and facts.

David started working on the television when he was 18 as a summer reporter for KGUN-TV in Tucson, Arizona in the year 1988. Gregory had attended American University and holds the Bachelors Degree in International Studies in 1992.

While studying at the college, he worked in the campus television station called ATV- American University Television. He was also named as the School of International Service’s alumnus of the year in 2005 and also respected placing him in the Dean’s Advisory Council.

David Gregory is a remarkable journalist whose work and contribution is always appreciable. He worked regularly as an analyst on Hardball with Chris Matthews (1997) and The Chris Matthews Show (2002). David Gregory was the part of the NBC team when the 2001 September 11 attack had happened and been the only television correspondent to be with the then President Bush to Ground Zero three days after the attack.

He has been near with the white house as the senior Correspondent from NBC. His other major works include election coverage in 2008, Race for the White House 1600 Pennsylvania Avenue, Meet the Press, NBC Nightly News, Imus in the Morning, Today, etc. Besides, he has also been pulled in several of the controversies and conflicts.

New York Post has written an Article on him stating “Why people hate NBC David Gregory?” This proves that he is not liked by many people. Maybe there are some personality issues or pride of him behind people’s hatred of him.

As for so, The Huffington Post states that David Gregory is being paid $4 million Dollars in order to leave the NBC News and “Meet the Press.” There is a question on David Gregory’s death. However, this is true that David Gregory is dead but no this 44-year-old journalist David Gregory but a 16-year-old boy who has a similar name with him. More of his bio and pictures are available in the different internet websites and are active on Twitter and Facebook.

Talking more on the personal life of David Gregory, he stands the height of 6 feet and five inches tall. He is a married man. He is married to Beth Wilkinson who is a former Fannie Mae executive vice president and former federal prosecutor, a corporate secretary and general counsel.

The couple had met in Oklahoma City Bombing case where David Gregory was covering as a reporter and Beth Wilkinson as a prosecutor for the case. The meeting turned into an affair and then the affair took the verge of marriage. The couple is blessed with three children. A son named Max and twins, one daughter named Ava and one son named Jed.

The children are also being raised in Jewish faith though his wife is not a Jewish. David and Beth are spending their happy married life and there are some rumors that David is trying to cheat his wife as people noticed him without a ring in his ring finger and etcetera but the rumor is vague. The couple has a good bond and there is no question if they will get divorced in near future.