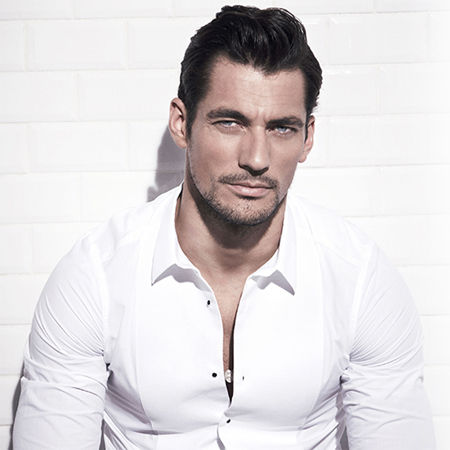 David Gandy is a British model famous as a winner of a televised show in 2001. He is also famous as a model for a number of companies including, 7 for all Mankind, Shiatzy Chen, Hugo Boss and the like. He has worked as a model for several renowned magazines as well.

Gandy is living a happy single life in London. He was previously in a relationship with singer Mollie King since 2011, and the couple remained in an on and off relationship for around four years before splitting.

David Gandy was born David James Gandy on 19 February 1980, in Billericay, Essex, England British Model. He was born to father Chris Gandy, and mother Brenda Gandy. His parents were the owner of a property and freight companies. He was raised in Essex in a lower-cla s s family. He has a sister named Claire Gandy.

Gandy wanted to study veterinary but he couldn't chase his dream due to his lower school grade. While he was studying multimedia computing, he worked in Porsches and Jaguars where he had to deliver the vehicles to the path for trial and testing. He graduated from the University of Gloucestershire with the degree of Marketing.

He was fantastic in extra-curricular activities, particularly in rugby, horse-riding and tap dancing. While he was still in University, his roommate entered his name into a model-search competition This Morning without even letting him know about it. Later, he went to win the competition while he was only 21, which came as the turning point of Gandy. He received a contract with Select Model Management in London as a prize.

Gandy worked for several renowned companies including Hugo Boss, Gant USA, H&M, Ma s simo Dutti, Carolina Herrera, 7 for all Mankind, and Shiatzy Chen among others. He was signed by the Italian designers Dolce & Gabbana for its apparel campaigns and fashion shows and was a prominent feature model for the duo for next six years.

He initially earned a huge fame for his work in the Dolce & Gabbana's fragrance Marija Vujovic and Light Blue which got over 11,000,000 online views. In 2010, he again modeled for the second Light Blue campaign for 2010. In 2011, the fashion house published a 280-page photographic coffee table book titled David Gandy by Dolce & Gabbana. The book revealed the images chronicling their years of collaboration.

In 2013, Gandy was again featured in the third campaign of Light Blue where this time, the commercial and advertisement on Capri island, Italy. In May 2014, Gandy played Jennifer Lopez's love interest in her First Love music video.

In June 2016, Gandy designed a range of underwear and sleepwear under a band name David Gandy for Autograph which was launched in September 2014. The following year, Gandy announced the addition of swimwear in his clothing. In 2016, M&S increased their collaboration with Gandy in increasing the Gandy for Autograph's range with the addition of sports-inspired loungewear while in March that year, they added swimwear in the clothesline.

The clothesline was further expanded in 2017 with the addition of Marks and Spencer. In May 2017, Dolce & Gabbana again featured him in the newest version of their Light Blue fragrance.

David Gandy has been periodically writing a blog for British magazine Vogue since February 2011, where he writes about his career, cars, fashion, antiques, and lifestyle in London. In October 2011, he was invited to be a guest writer of Evening Standard.

In September 2013, The Daily Telegraph announced Gandy as a contributing columnist for their new men's lifestyle section Telegraph Men. After that, he signed with several other media groups for his contribution as a writer. Later in 2017, he worked as a guest editor for Boat International.

The famous and dashing model and creative columnist Gandy is actively involved in charity works. He was part of a Fashion for Relief campaign in 2010 which raised a fund for the victims of the Haitian earthquake. Later in April 2011, he participated in the London Marathon with the Oxglam team which ran the marathon to raise money for Oxfam.

In late 2014, he participated in the One for the Boys celebrity style show organized by Samuel L. Jackson with the motive of promoting awareness of testicular cancer and encouraging the early detection of the disease.

In 2016, Gandy collaborated with the fashion label Selfish Mother in designing a holiday jumper which was organized to help the Save the Children.

David Gandy was pa s sionate about car racing from his childhood and he dreamt of being a racer some day. However, he dream seemed to have faded away after he pursued a career in modeling. But his hope revived after he received the racing license in 2012.

Soon after he received the license, he was invited to the Mille Miglia regularity trial in Italy in 2013. Then, he was a part of Team Jaguar with co-driver, Yasmin Le Bon. They were pushed out of the track by a competitor but later they made their comeback and ended the race in 158th position out of 415 cars.

Again in 2015, he was part of the Mille Miglia race where his co-driver was television presenter Jodie Kidd. The pair of drivers in a Jaguar XK120 came 171st in over 400 competitors.

David Gandy was one of six celebrity boaters joining the Vector Martini's Speedboat Racing Team. Each of the four-man crew attempted a world endurance record as part of a television doc u mentary series. He was on the Vector Martini Powerboat which won both legs of the race and became the overall winners.

David Gandy was ranked third most successful male model by Forbes magazine in 2009 when he stayed behind Matt Gordon and Sean O'Pry. He became the first male to be nominated for Model of the Year by the British Fashion Council in 2010. Later, in 2011, the ShortList named him as the Face of Today.

In 2013, Gandy became the only male to be included in the Models & Muses category of BoF 500: The People Shaping the Global Fashion Industry by Business of Fashion. The same year, he was ranked second in The World's Top-Earning Male Models of 2013 just behind O'Pry.

In September 2014, he was ranked number 2 of the Top 10 Male Models of All Time just behind Tyson Beckford whereas he was called Model of the Year by the Spanish GQ at the Men of the Year Awards in Madrid.

In March 2014, he was awarded the first Man of the Year award at the 2014 Rodial Beautiful Awards. Similarly, in September that year, he won the first Founders Award from the annual Scottish Fashion Awards for his contribution of Scottish and British fashion over past nine years.

David Gandy's Salary And Net Worth

The very stylish and popular British model David Gandy's net worth is estimated to be around $16 million as of 2018. He is one of the highest earning male models of England and worldwide as well.

He was ranked 2 by Forbes in the world's most earning male model in 2013 when his earning was a whopping $1.4 million. According to the popular net worth site, his annual salary/income is estimated to be around $1 million.

David Gandy was in a relationship with a British singer Mollie King. She is a s sociated with the British girl band The Saturdays. They first started dating in 2011, but their relationship ended just 10 months after.

After the breakup, Gandy started dating and English model Sarah Ann Macklin with whom he was in an affair for around a year since May 2012. They split in 2013. Later, in 2015, Gandy rekindled his romance with ex-girlfriend King, however, the reconciliation didn't last more than a year. In early 2016, singer King confirmed her separation with the model. After his split with King, he has not dated any other girl and is living a happy single life in his West-London home.