David Caruso is a popular American actor and producer, who has portrayed the character of Detective John Kelly on crime drama series, NYPD Blue. He is also famous for appearing as Lieutenant Horatio Caine on CSI: Miami. Besides this, he is known for appearing in movies like First Blood, An Officer and a Gentleman, Kiss of Death, Twins, among others.

David’s full name is David Stephen Caruso. He was born on 7th January 1956 and is currently 64 years old. He was born in Forest Hills, Queens, New York, in the United States of America.

David is of American nationality, whereas his ethnicity is mixed, Italian, and Irish descent. Sadly his father left the family when he was two years old.

Regarding educational background, he attended Our Lady Queen of Martyrs Catholic School, and later enrolled at Archbishop Molloy High School.

The 64 years old actor David started his professional journey in 1976, appearing as Bellboy in Ryan’s Hope, but he was uncredited for the role. He then started his movie career in 1980, portraying the character of Danny in the film Getting Wasted. 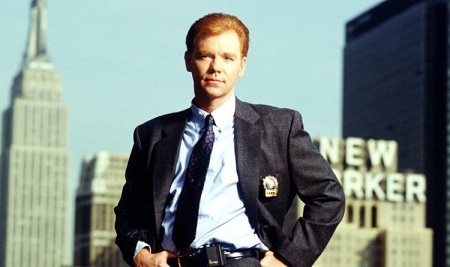 Similarly, David has worked in movies like First Blood, Without Warning, Blue City, China Girl, King of New York, Cold Around the Heart, Kiss of Death, Mad Dog and Glory, Proof of Like, Black Point, Session 9, Jade, Hudson Hawk, Blue City, Thief of Hearts, and many others.

Besides acting career, David is also the founder of LexiconDigital.tv and DavidCarusoTelevision.tv. Likewise, he is also the co-owner of the clothing store, Steam on Sunset in South Miami.

Personal life; Is He Married Now?

Talking about David’s personal life, he has gone through many ups and downs. He has married thrice and divorced in the same number. In 1979, he married Cheri Maugans, but their relationship only worked for five years.

In the same year of divorcing the first wife in 1984, he tied the knot with second wife, Rachel Ticotin. Just like his previous marriage, his second conjugal life also lasted for only three years. The former couple welcomed daughter Greta together.

CSI: Miami’ star then went on to exchange the wedding vows with Margaret Buckley in 1996. David and his third wife, Margaret, were married until 2007. The reasons behind all of his divorces are yet to be revealed.

Besides his failures marriage, David is also known for his longterm relationship with partner Liza Marquez. The ex-couple welcomed two kids together; daughter Paloma and son Marquez. Back in April 2009, his then-girlfriend filed papers for fraud.

There is no doubt that the actor has collected a high figure of money from his decades' long professional career. As of 2020, David Caruso’s net worth is reported to be around $35 million, whereas he earns $375 thousand per episode.

David’s professional acting career is the primary source of income, whereas he also earned hefty from endorsements, commercial deals, and appearances on events.