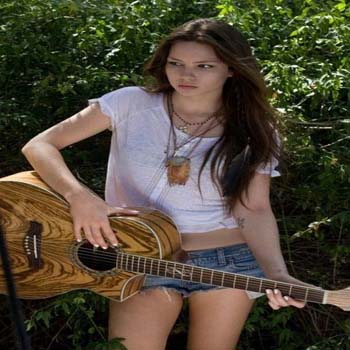 Beautiful and talented, Daveigh Chase is an actress and model widely recognized for her role as Rhonda Volmer in the HBO series named Big Love. She is also known for playing the role as Lilo Pelekai in the American Disney media franchise, Lilo & Stitch.

Chase is an American singer as well. She was born as Daveigh Elizabeth  Chase on July 24, 1990, in Las Vegas, US. As far as her nationality, she is an American belonging to the White-American ethnicity.

She likes to dance, read, surf, horseback and also just hang out with friends and family.

She was named Daveigh Elizabeth Chase after her parents Cathy Chase and John Schwallier. But her parents got divorced when she was a baby. She was bought up in Albany, Oregon and lived with her mother.

After that, she moved to Los Angeles to follow her career. She has a younger brother named Cade who was born in 2006. She liked to perform from her early age started dancing and singing in her hometown.

She also started performing at other local areas events and shows. When she was 4 years old she was inspired by watching videos of Barney and Friends. After watching the video she said that she also wanted to be like kids on the video.

Later on, her mother entered her in Little Miss America Pageant where she won a national vocal competition. At the age of 7, she was signed by a talent agent and she did a Campbell’s Soup advertisement. In 1998 she had done a role in Utah which was produced by a musical theater.

In 2002 Chase had given her voice in a Disney animated film Lilo and Stitch to a lead role Lilo Pelekai. She had also voiced in Spirited Away to the lead role Chihiro Ogino who was 10 years old Japanese girl.

In 2002, she had done feature film The Ring as Samara Morgan. She has also been awarded as the Best Villain at MTV Movie Awards in 2003 for her performance.

In 2006, she had acted in a drama series Big Love in the HBO as Rhonda Volmer. After that Chase appeared in the Big Love’s Season two in 2007. She has also done a Kids show Betsy’s Kindergarten Adventure in the same year.

She has acted in a psychological thriller film Prettyface as Jenna. Also she had done a film named Jack’s Black. In 2010 she had acted in a short film In Between Days as Kent. She had also done two films in 2012 Yellow as Young Mary and Little Red Wagon as Kelley Bonner.

She had won many awards and nominated for several times. She had won Young Artist awards for Best Performance in a Voice-Over Role: Age 10 or Under for Lilo and Stitch in 2003.

Also, she has won Annie Awards for Outstanding Voice Acting In an Animated Feature Production. In the same years, she had also won MTV Movie Awards for Best Villain for her performance in the film The Ring.

Chase has reached the age of 27 now. She is not married yet. She previously was in a relationship with two guys and was once rumored about her pregnancy.

Her first affair was with Dylan Sprouse. The couple was the child actors at that time. They stayed in a relationship for short period of time.

Later, she started a relationship with Erik Per Sullivan, as both of them worked together. Their relationship also did not last long.

As Chase is a very talented singer she had joined a small band as lead singer in 1999. She took a stage for the opening act of Reba McEntire. She has sung God Bless America for which she had been picked up by Steven Spielberg.

She had also performed for the Schools Out Christmas album Holly Jolly Christmas and also sang Tossin and Turnin at the Oliver and Others episode of Oliver Beene. She has also sung at various times like in the episode The Happiest Girl. She has given the 60s hit songs.

Chase has earned a huge amount of salary from her work. She has maintained an incredible net worth of $2 million.