Born in Covina, California, Darrell Sheets is one lucky person to earn both fame and money from the job he is passionate about. Sheets was interested in collecting vintage items from an early age which he later transformed into his profession. He ran a storage business for three decades before joining the reality series Storage Wars in 2010.

Darrell Sheets was born on 13th May 1958 in Covina, California. According to his date of birth, his zodiac sign is Taurus which defines him as a practical, devoted, and responsible person.

From his childhood, he was more into collecting antique collection. He eventually became an expert in course of time. He has remained tight-lipped about his family background and yet to disclose anything regarding his parents and siblings. As far as his ethnicity is concerned, he is a White and regarding his nationality, he is a White American.

From his early age, Darrell Sheets was interested in collecting things, which later became his passion. Over the course of time, Sheets collected some really amazing vintage items. His most valuable findings include a letter by Abraham Lincoln and four drawings of Pablo Picasso.

After years later, he started selling his collection through his online store. Sheets later started his own storage locker business. During the time, he started watching the reality television show, Storage Wars. Soon after, he became inspired to participate in the show and decided to join the series as a father-son duo cause his son Brandon Sheets was a great help to him in his business. 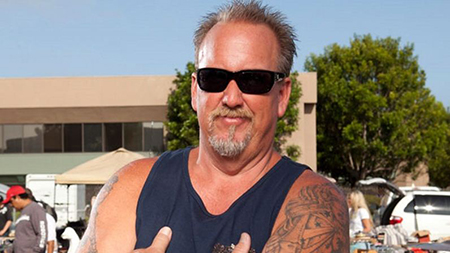 In the year 2010, Sheets and his son Brandon became a part of the show and soon after caught the attention of the audience because of their tactful strategies. In the show, he is known as The Gambler because of his strong and fierce personality during the auction.

Hey #storagewars fans tomorrow we proudly are filming our 250th episode of the show, what a great run, thanks to all of you Merry Christmas from all of us. @aetv Thanks to the greatest production team for making us who we are [email protected] _prod

Father and son duo found one of the biggest treasures of the show, a locker they brought for $3,600 which has treasures worth $300,000. Following the success, he became on the main cast of the show. Brandi Passante, Laura Dotson, Dave Hester, Jarrod Schulz, Dan Dotson, Mary Padian are some of the members of the show.

The reality star, Darrell Sheets is doing an incredible performance in the series Storage Wars. So far he is enjoying a successful professional career. As per the multiple sources, the reality television star has an incredible net worth of $4.5 million.

From the show Storage Wars, Sheets is paid approx $15,000 to $30,000 per episode, which is his major source of income. It has also been reported that the TV personality owns a house in Huntington Beach California.

Previously, Darrell Sheets was married but there is no information about his ex-wife. From the marriage, Sheets is a father of two children including his son Brandon Sheets who helps him in the storage business.

The star was in a serious relationship with his then-girlfriend Kimber Wuerfel. Sheets met Wuerfel in California and fell in love with her in the first meeting. Luckily, things worked and shortly after, the two started hanging out.

The two even became engaged and were living together with their four children; two children from Sheets' previous marriage and two from Wuerfel's previous relationship. But for some reason, they ended their relationship.

Currently, Sheets is in a love relationship with his sweetheart Romney Snyder for a few years now. In 2016, he announced the news of their engagement. They look happy together and are so in love.

In 2016 Sheets decided to drop his more than 300 pounds weight. According to him, he tried several methods to drop some pounds off his body but despite hard work and exercise, he wasn’t seeing any good result.

He then took help of Nutrisystem to drop a significant amount of weight.

“My joints hurt. My body hurt. I was tired of exercise with no results. Plus, I had to get away from eating cheeseburgers and making bad choices on the set,”

“Nutrisystem was the easy answer.”

With the Help of Nutrisystem Darrell Sheets’, weight loss dream came true as he successfully went being 197 lbs from 315 lbs. Isn’t that amazing. He shared his joy on Twitter.

Yes it's hard to believe but I went from 315lbs to 197 lbs thank you nutrisystem and #dandelion… https://t.co/eDLpAllqKq

Here's a video of the reality star in the show Storage Wars.