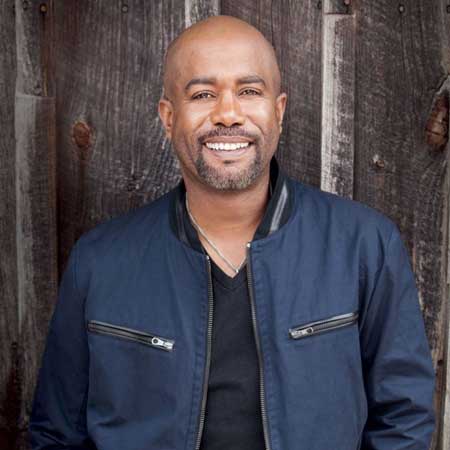 Darius Rucker is an American singer and songwriter who is very popular as the vocalist of the Hootie & the Blowfish rock band. He is the founder of the Grammy Award-winning American rock band named Hootie and the Blowfish. He earned massive popularity as the lead vocalist and rhythm guitarist of the band.

Darius Rucker was born on May 13, 1966, in Charleston, South Carolina, the U.S. He holds an American nationality belonging to the African American ethnicity.

Rucker grew up in a family with a poor economic background.  His father has been never around, as he only saw his father before church on Sundays.  His father was in a gospel band called The Rolling Stones.

His mother, Carolyn Rucker, raised Rucker along with his three sisters and two brothers. His family member includes his mother, her two sisters, his grandmother, and 14 children were all living in a three-bedroom house. The family attended church every Sunday.

Rucker was fond of singing since his childhood. His sister, L'Corine Rucker, recalled that singing was always his dream.

Rucker began his career as the lead singer of the band named Hootie and the Blowfish. The band was formed in 1986. Later, he met fellow band members Mark Bryan, Jim "Soni" Sonefeld, and Dean Felber while attending the University of Carolina.

Rucker made his solo R&B album, The Return of Mongo Slade, for Atlantic Records. The album was not released by the label because of contractual changes.

Later, Hidden Beach Recordings, an independent label acquired the masters from Atlantic and released the album as Back to Then in July 2002. He appeared on a pop-star edition of the quiz show named Who Wants to Be a Millionaire? in July 2001.

Rucker has also portrayed a singing cowboy in a television commercial for the fast-food company, Burger King. He recently released his new song If I Told You.

Darius Rucker's Net Worth and Salary

Darius Rucker has a successful music career. He has been winning several awards and has earned great value for his name. As of 2019, he has an estimated net worth of $14 million, according to celebrity and richest net worth.

Rucker is being paid tremendously for his work and has excelled at work. Apart from the money he has a worldwide fan following. Rucker stands at an incredible height of 1.7 meters (5 feet 6 inches).

Rucker has reached the age of 51 now.  He is a married man and has three children. He is an avid fan of South Carolina Gamecocks as well as the Miami Dolphins and Cincinnati Reds.  He cites his favorite movie as Stir Crazy, which he has seen more than 100 times. He is a good friend of Tiger Woods.

Rucker's mother died of a heart attack in November 1992. His grief inspired two Hootie & the Blowfish songs: "I'm Goin' Home" and "Not Even the Trees.

Rucker married his girlfriend, Beth Leonard in 2000, after having an affair for several years. There is no sign of divorce between them, as they are living a happily married life. His wife gave birth to their first child, a daughter named Carolyn Pearl Phillips on April 21, 1995.

The couple welcomed their second child, a daughter named Daniella Rose on May 16, 2001. She gave birth to her son, Jack in 2005. He currently resides in South Carolina with his beautiful wife and children.