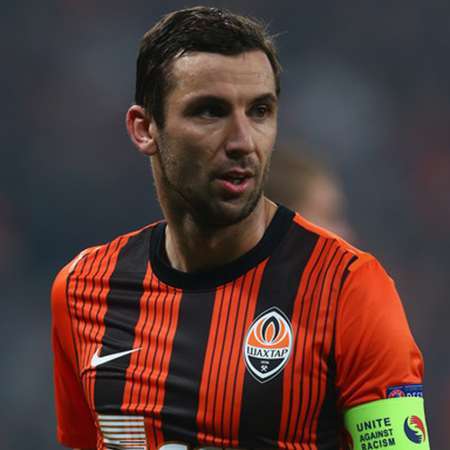 Darijo Srna is a Croatian football player who was born on 1st May 1982. He plays for Shakhtar Donetsk as captain also he is also captain of Croatian national team..  He is known for dis freekick and crossing ability. He also plays as right back Defender and right midfielder. Darijo started his career at Hajduk Split after that he moved to Shakhtar in 2003. He had won many trophies when he was in Shakhtar. He had also won UEFA Cup in 2009, Ukrainian Cup, Ukrainian Premier League and Ukrainian Super Cup.

He made his international debut in November 2002 for Croatia. He had been made the captain of the national team in 2009. In the history of the Croatian national team, he was the most capped player. He had also represented the country on 2006 FIFA World Cup, UEFA Euro 2008, UEFA Euro 2004 and UEFA Euro 2012. In the history of Shakhtar Donetsk, he is considered to be one of the most Legendary players. When he was in Shakhtar due to his loyalty to Shakhtar he had got offers from many clubs like Bayern Munich and Chelsea F.C.

Due Srna ’s was signed by Hajduk Split and his professional football career started with it. When he was at Hajduk he had won 1999-2000 Croatian Cup, 2000-2001  Prva UEFA Cup and also 2002-2003 Croatian Cup. He had made 83 appearances for the Hajduk Split including 63 league appearances. He had scored 8 goals. After that, he had moved to Shakhtar Donetsk. Srna was sold to Shakhtar Donetsk in 2003. At first, he was the common member and also the captain in his club side. Ha had made 29 appearances in his first season with the club including 19 appearances in the league by scoring 3 goals. He had helped the club to win Ukrainian Cup.

In his second season, he made 42 appearances for the club of which 22 came in the league. On 14th September 2004, he had made his debut in the main stage of UEFA Championship League against Milan. In the third season, he had made 21 appearances scoring twice. Shakhtar had won the Super Cup Final against Dynamo Kyive on 15th July 2008. He had scored the first goal in 3-0 over Illichivets Mariupol on 3rd August.

He had scored a goal in Shakhtar’s against Kryvbas on 18th October. He had also scored the winning goal in Shakhatr’s leagued over Illichivets on 2nd March. On 22nd March he had scored only one goal in a league win over Vorskla.On 28th August he had played Shakhtar’s 1-0 against Barcelona in UEFA Super Cup. He had scored the third goal in 4-1 victory over Club Brugge in Europa League.

On 3rd April he had scored one goal in the league over Obolon. He had played 39 matches, 26 in the league and had scored 4 goals of which 2 came in the league. For Shakhtar, the season 2010-11 was very successful as they won treble Ukrainian Cup, Premier Cup, and Super Cup. On 4th July he played in Super Cup Victory for the club against Tavriya Simferopol. On 1st April he scored the first goal in 3-1 over Illichivets Mariupol.

Again on 7th May, he scored the second goal in 2-0 in Ukrainian Cup Final over Dynamo Kyiv by picking up a yellow card. He was named as UEFA Champions League Team of the Year in 2010-11 seasons. He had made 39 appearances of which 27 were in the league scoring 4 goals of which 3 came in the league. In 2011-12 Shakhtar won Premier League and also Ukrainian Cup. On 2nd December he had scored the first goal in 5-0 league victory against Arsenal Kyiv. Shakhtar won the league by 4 points against Dynamo Kyiv. He scored 3 goals in 25 league matches and made 34 appearances in the season. Isrna had helped Shakhtar had won the 2014 United Supercuo which was a tournament between two clubs from Russian and Ukraine.

In November 2002 Srna had mad his full international debut for Croatian national team against Romania. In March 2003 he had scored his first international goal for Croatia in Euro 2004 qualifier against Belgium. After Euro 2004 he became one of the key players in Croatia’s 2006 World Cup qualifying campaign by scoring five goals. During 2006 World Cup qualifying he had scored both goals in Croatia’s two against Sweden. After that, he had starred all three games of Croatia’s 2006 World Cup campaing.

Srna’s is the son to Bosnian father Uzeir and Croatian mother Milka are her parents. His father was a World War II orphan and also a former football player for FK Sarajevo. He has married to longtime girlfriend Mirela Foric(spouse). He had met Mirela through mutual friend football player Bosko Balaban. The couple has a daughter Kasja who was born on July 2010. Srna is a well built player with a height of 5 feet 9 inches and has a weight of 77.1 kgs.  His current market value is 10,000,000 Euros.