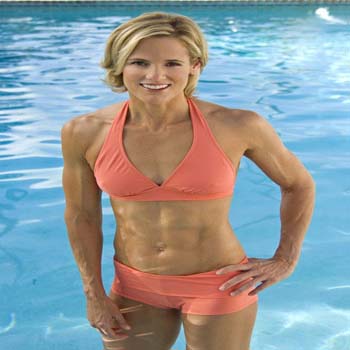 A former World champion in swimming, Dana Torres, is from the United States of America. She is twelve times gold medal champions in Olympic games. Torres is the first American swimmer who represented the nation in five Olympic games.

Dara Grace Torres was born on April 15, 1967, in Beverly Hills, California. She is the daughter of Edward Torres, a casino owner, and former model Marylu Kauder. She grew up in Los Angeles, California, the fifth of six children and the older of two girls. At aged 7, Torres started following her brothers to swim practice at the local Y.M.C.A. and later joined the Culver City swim team.

Torres attended the Westlake School for Girls (now Harvard-Westlake School, and swam for the Westlake swim team under coach Darlene Bible, where she set California Interscholastic Federation records that remain to this day. As a teenager in the 1980s, she swam for the Mission Viejo Nadadores, in Mission Viejo, California, under Coach Mark Schubert, the 2008 Olympic swimming coach.

Torres accepted an athletic scholarship to attend the University of Florida in Gainesville, Florida, where she swam for the Florida Gators swimming and diving team in National Collegiate Athletic Association (NCAA) competition under Coach Randy Reese from 1986 to 1989.

At the 1984 Summer Olympics in Los Angeles, Torres was a member of the winning U.S. women's 4×100-meter freestyle relay team, earning a gold medal for swimming in the first-round qualifying heat as well the event final. For the 1988 Summer Olympics in Seoul, Torres qualified for the U.S. Olympic women's team in one individual event and two relay events.

Torres earned a bronze medal for swimming for the third-place U.S. women's team. Torres won five medals at the 2000 Summer Olympics in Sydney, but, as usual, saved her best for two of the major relay events of the U.S. Olympic women's team.

At the trials, she qualified for the event finals in the 50-meter freestyle and broke the American record with a time of 24.38 seconds in the semi-final. In the 50-meter finals, she broke that record for the ninth time, setting it at 24.25 seconds and winning the top American women's spot in the event.

On July 7, Torres pulled out of 100-meter freestyle event to focus her efforts on the 50-meter freestyle. On July 30, at the U.S. swim team's final training in Singapore, Torres, Amanda Beard, and Natalie Coughlin were elected captains of the U.S. Olympic women's swimming team.

On August 17, 2008, at the age of 41 years and 125 days, she won the silver medal in the women's 50-meter freestyle, finishing in a new American record time of 24.07 seconds. Torres' twelve Olympic medals tied the all-time medal record for a female Olympic swimmer set by fellow American Jenny Thompson in 2004; American Natalie Coughlin subsequently equaled the record in 2012.

In the mid-1990s, she married and subsequently divorced sports producer Jeff Gowen. She was later married to Israeli-born surgeon Itzhak Shasha. Torres converted to Judaism before the marriage. Torres and her reproductive endocrinologist, David Hoffman began dating. Though they are no longer dating, they are the parents of Tessa Grace Torres-Hoffman, born in April 2006. Torres and Hoffman remain close friends.

Torres stands 6 feet tall, not very surprising for a swimmer. She is currently 47 years old. She is an American but of Latin ethnicity. Her annual salary is around $1,250,000 that makes her estimated net worth is about to be $5,000,000.