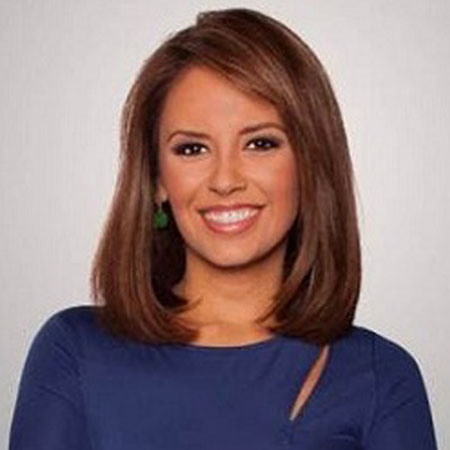 Born and raised in Sugar Lan, Daniella Guzman is a journalist who currently serves as a co-anchor of Today in L.A. She is also a contributor to the  L.A. Parent Magazine. Besides, the media personality also worked in print media and public relations.

Who Is Daniella Guzman?

Daniella Guzman was born on the 14th of February, 1982 in Sugarland, Texas, United States of America. She grew up in Fort Bend County with her family. She holds American nationality and as far as her ethnicity is concerned, she is a White.

Her parents still live in her childhood home. Guzman joined Clements High School and graduated from there. Guzman later went on to enroll at the University of St. Thomas in Houston and graduated with a B.A. in bilingual journalism and communications.

Following her graduation, Guzman started working with the Univision network.

Daniella Guzman moved to Telemundo-owned station KTMD in Texas in 2004. She also worked for Televisa in Mexico and The Houston Chronicle. Later in the year 2006, Daniella Guzman joined NBC-affiliated station KPRC-TV as a weekend anchor and general assignment reporter.

Not only this, but Guzman also became one of the first reporters on the scene to cover the 2009 Fort Hood shooting. Moreover, she was named co-anchor with Stefan Holt of WMAQ-TV's weekday morning newscasts in 2012.

Two years later in 2014, Guzman joined KNBC as a co-anchor of Today in L.A. alongside Whit Johnson. Alycia Lane left the show in 2013. She was hired as a contributor by L.A. Parent Magazine in May 2016.

Besides broadcasting, Guzman worked in advertising, print media, and public relations. She also won an Emmy Award. Her constant quest for answers regarding the death of President John F. Kennedy led to her prominent career as a reporter.

Daniella Guzman has made a decent amount of money from her work in various networks. As per some sources, her net worth is believed to be more than $1 million, in 2019.

Guzman currently serves as co-anchor of Today in L.A. and is paid a handsome salary too though it is a little unclear now. Sources reports, the journalist owns a house in LA.

The 37-year-old Daniella Guzman is currently married to Hector Villegas. The couple has two daughters, Sofia Villegas and Olivia Villegas. She was one of the five newswomen at the station who gave birth in the first half of 2011. Moreover, she was the only one to have a girl child amongst the five too.

Her first child a daughter Sofia Villegas joined by her younger sister Olivia Villegas, on October 1, 2015. She announced her second pregnancy via her Instagram on May 11, 2015.

Daniella lives in Los Angeles with her husband and two children. Not any rumors have been heard regarding her extra-marital affairs or dissatisfied married life. She is living happily with her husband Hector.

She Is An Avid Philanthropist

Besides her profession as a journalist, Daniella Guzman also volunteers for many organizations such as The Service Club, BuildOn, March of Dimes, and many others. Furthermore, she helped the Ronald McDonald House by sitting on the organization's House of Representatives.