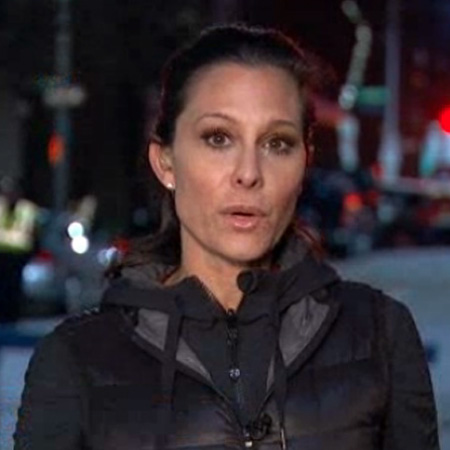 American TV journalist Alycia Lane worked as a weekday morning anchor at KNBC-TV in Los Angeles until October 2013. She also served as a was co-anchor of the weekday evening newscasts on KYW-TV in Philadelphia or around a half-decade from  September 2003 until January 2008.

The renowned media personality has been married twice and has a child.

Alycia Lane was born on May 10, 1972, Lake Grove, New York, US. She is the daughter of a Puerto Rican mother and a Welsh father. She holds an American nationality and regarding his ethnicity, she has a mixed ethnical background. She was raised up in Lake Grove, New York along with her family.

Alycia is a master’s degree holder in Broadcast Journalism from the Medill School of Journalism at Northwestern University. She has an undergraduate degree with honors from State University of New York at Albany. She can also speak Spanish fluently.

While doing her master’s, Alycia Lane started working as a Washington D.C- based reporter for KNST in Kansas. After her master’s degree, she worked in News 12 the Bronx as an anchor and a reporter.

In 2000, Lane moved to Maimi and landing her job as a reporter for Fox affiliate WSVN. A year later she joined a rival station to WSVN, NBC. Lane was there for two years until she moved to Philadelphia in September 2003 to work for CBS-owned KYW-TV. She and Larry Mendte worked together on their 11 0’ clock newscast.

But Lane's contract with KYW-TV was terminated following her controversies in off-screen life. In July 2009 she moved to Los Angeles and was hired by NBC affiliate KNBC on August 18. She replaced Kim Baldonado and debuted on air on August 29.

In February 2010, Lane became the co-anchor of Today in LA on KNBC. It was announced by KNBC in October 2013 that Alycia Lane was no longer an employee of the station.

Alycia Lane made a large amount of money from her journalism career which is yet to be revealed which according to several online sources is believed to be more than $1 million.

Alycia Lane has been married twice. He first husband was former a minor-league baseball player Dino Calandrielo. The couple was married in the year 2000 but got divorced in 2004.

Following their divorce, Lane went on to marry to her boyfriend Jay Adkins in 2005 but again got divorced in 2007. Lane was in a relationship with Chris Wragge. It was also reported that she dated Chris Brooke. The couple started dating in 2007 and broke up in 2011.

At the age of 42, she gave birth to her 1st child a daughter Averie on the weekend of June 21-22, 2014. However the detail on her child father is yet to be disclosed. She has not mentioned about her baby daddy anywhere till this date.

She is one of the members of the National Association of Hispanic Journalists.

Controversy And Scandal Of Alycia Lane

Alycia Lane Controversies became a usual thing while her broadcasting career was in peak. While in May 2007 she was accused of mailing pictures of her and her friends in a bikini to NFL network’ Rich Eisen.

Though Alycia claimed that they were just platonic friends over 10 years and they emailed each other pictures when the e-mails were released in a pre-trial motion in the case filed by Lane against CBS concerning her wrongful termination from KYW-TV.

By the end of the year, Lane was again in the news for solid wrong reasons. Alycia got charged with felony count of a s sault on a female police officer. She was arrested on December 16, 2007, in New York City.