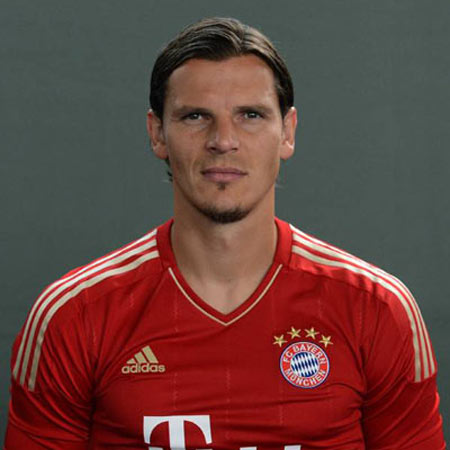 Daniel Van Buyten, a Belgian footballer playing as a defender for the current team of Bayern Munich was born in 7 February 1978 in Chimay, Belgium. His parents are father, Franz, a popular Belgian wrestler and mother, Renate, is a German. He plays jersey No.5 for his team.

Van Buyten left Belgian Standard Liege with he had been playing since 1999 and joined Marseille in the summer 2001. Because of his productive play with the club, he agreed to play on a short term loan agreement with Manchester City for the Premier League until the end of the season. At the end of the season he returned to Marseille and was signed by Hamburg, a Bundesliga club in June 2004 in the agreement to a four – year deal. In June 2006, Bayern Munich announced they signed Van Buyten acquiring him from Hamburg, to a contract lasting through the 2009-10 season. He played successfully in the first season with the club, forming a centre-back partnership with Lucio. With successful playing career with the Bavarian club Bayern Munich his agreement was extended and which has been his Current club.

He is single but is in an affairs with his partner Celine. Their pictures are all over the internet but officially Van Buyot is single. They have two children, daughter Lou-Ann and son Lee-Roy. He is 1.97m tall height and 95 kg weight. His shoe size is 45.

While he was with Manchester City, he was in the News along with two players Djamel Belmadi and Matias Vuoso as they became the victim of a theft by two bankers who stole more than £350,000 from their accounts. Later, the bankers along with his supervisor were jailed.