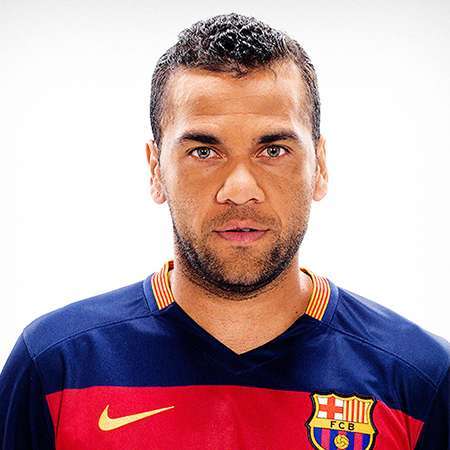 Brazilian international footballer Dani Alves plays as a right back for French giant club Paris Saint-Germain (PSG) and the Brazil national team. He is a former player of FC Barcelona and Sevilla. He is playing for the Brazilian national team since 2006. He was a squad for two FIFA World Cups and four Copa America all-time list.

Alves is the second-most decorated defender of all-time in European competitions with nine European medals and became the second defender behind Paulo Maldini on the all-time list.

Daniel Alves da Silva  mostly known as Dani Alves is a footballer of Brazillian origin who plays in La Liga for FC Barcelona and also in the Brazillian national team serving as an offensive right back. Dani was born in Juazeiro, a city in the Brazilian state of Bahia, to rDomingos Alves Da Silva, a farmer father  on May 6, 1983.

From very childhood days, he used to play football with the neighbouring kids. Alves's father Domingo had a pa s sion for football as well, and eventually managed to organize his own football team. Although there is not much information about his schooling, he joined one of the reputed University in Brazil but later was dropped out.

It is going forward where he most impresses, and he can shoot with both his left and his right foot. He is also a free kick specialist, and is highly renowned for his crossing ability. Alves, at the age of 10, started as a winger, but because of the lack of goals he had, his father re-positioned him as a right back, a position he still plays until now.

Daniel Alves started out playing at youth level for the biggest club in the region, Esporte Clube Bahia. He progressed through the ranks, and was just 18 when he played his first game in the Brazilian Serie A, under management at the time of former Barca man Evaristo de Macedo.

Bahia beat Parana 3-0 that day, and Alves impressed from the outset. This led to a call-up for the Brazilian Under 20 team in January 2003. Sevilla had their eye on him, and brought him to Europe on loan. Now considered one of the best full backs in the world, Alves came to Barça in the summer of 2008. In his first season, he was involved in the incredible treble winning campaign.

He missed very few games, but one of those was the Champions League final in Rome. By now he was fully consolidated as one of the finest examples the tradition of Brazilian wing backs, contributing five goals in his 54 appearances for his club that year.

Despite injury problems, he was the first choice right back in his second season, winning his second consecutive league title among other honours.

He scored 3 goals in 29 matches and for the second year running was included in the UEFA team of the year. His first World Cup was that played in South Africa in 2012, in which Brazil were knocked out at the quarter final stage by Holland.

He came to FC Barcelona in the summer of 2008, aged 25 years, after six seasons with Sevilla. Despite being just 173 cm tall and weighing only 64 kg, Alves is a very strong player. He covers a lot of ground, being a tireless runner able to move up and down the wing – contributing regularly to the attack, without ever neglecting his defensive duties. Pleased with his performances, the Andalusian outfit soon acquired permanent rights to the player.

Dani Alves' Net Worth And Achievements

He has won many awards for his great and marvellous contribution in the football. Daniel Alves da Silva has already achieved a huge amount of success and with this dedication, he can continue to move on his path of success.

Dani Alves is one of the strongest, most intense right-sided players in the world, and covers an extraordinary amount of ground. Alves first professional title was the Bahia Championship in 2001 followed by the Northeast Cup in 2001 and 2002.

In late 2003, Alves was in the Brazilian U20 team that won the World Cup in the UAE, beating Spain and Andrés Iniesta 1-0 in the final. Alves was named best full back in the competition. That same 2003/04 season, Alves played 29 times at right back for Sevilla, helping his season to win a European berth.

As time went by, Alves consolidated his role as both a defender and part of the attack in the Sevilla team that in 2005/06 won the UEFA Cup. The Brazilian footballer Daniel Alves da Silva was named best player in that competition, and a few months later, won the Super Cup as his side beat FC Barcelona in Monaco.

In 2006/07, the Brazilian formed an essential part of the Sevilla team that went on to also retain the UEFA Cup, win the European Supercup and also collect the Copa del Rey. A year before joining Barça, Alves won the Spanish Super Cup by beating Madrid and also gained his first Champions League experience.

Sevilla went out in the second round to Turkish club Fenerbahçe. In that 2007/08 season, Alves played 33 league games and was the second most used player in the squad after Navas. In his third year at Barça, he won three new titles, the Spanish Supercup, La Liga and the Champions League.

And unlike in Rome, this time he did appear at the Wembley final in a year that he also signed an extension to his contract until 2015. In his fourth year at FCB, he won the European Supercup, the Spanish Supercup and the Copa del Rey, scoring three goals in the six competitions that Barca competed in, and making 52 appearances.

Alves has also been a regular feature in the Brazilian national team since 2006/07. In the summer of 2007, the right back won the Copa America and in 2009 collected a Confederations Cup winners medal.

Dani was married to Dinora Santana from 2008 to 2011. His current romantic life is not public. Recently on April 27th, 2014 during a game at Villarreal he was thrown a banana by a racist audience. He took the incident lightly and took a bite from it. He said this has been happening in Spain and things can not be changed easily and rapidly. His market value is 18,000,000 Euros. He is 1.73 m tall and is aged 30.