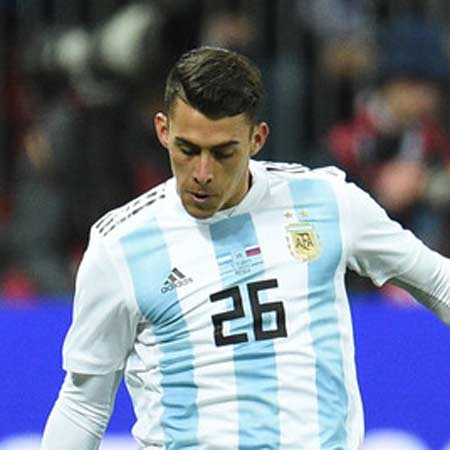 One of the versatile player to set an impressive record, the Argentina forward Cristian Pavon is comfortable with both feet. Pavon is playing as a forward for Boca Juniors and is representing his national team along with some legendary players. His record-breaking performances impressed many giant clubs who are eagerly waiting to sign him. He is selected in the final squad for 2018 World Cup in Russia.

Cristian Pavon was born on 21st January 1996 in Cordoba, Argentina to parents Veronica Campos and Walter Pavon. Pavon is Aquarius which defines his personality, to be frank, and imaginative. He is Argentine by nationality and belongs to Caucasian ethnicity/race.

Cristia Pavon started his professional career from the club Atletico Talleres. At the age of 16, Pavon signed a contract with the club and played until 7h February 2012.

Pavon kept an impressive record due to which many famous clubs showed interest to sign him.

The young player, Christian Pavon represented Argentina Under-23 side at the 2016 Summer Olympics. In 2017, Pavon was selected for the national team for the friendly match against Russia and Nigeria.

Pavon showed his impressive skills in both of the matches. As of 2018, he was selected in the final squad for the 2018 World Cup along with the legendary players like Lionel Messi, Sergio Aguero, and Pauli Dybala.

Cristian Pavon, the rising footballer, has an estimated net worth of over $1 million, however, the amount is not made official and still under review. Pavon earns a salary of million dollars from his club Boca Junior.

The 5-feet-6 inches player, Cristian Pavon, is private when it comes to his personal life. Pavon prefers to keep his dating life and relationship low key. With limited information about his love life, it is assumed that the young football star is single in the present days.

Pavon inked the names of his parents on his arm.

Here is the video which shows the skills and goals of Cristian Pavon: