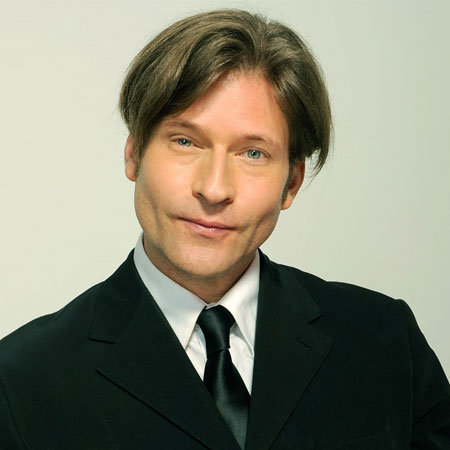 Crispin Glover is an American actor, director, recording artist, screenwriter, publisher, as well as author, best known for portraying eccentric people on screen, including George McFly in Back to the Future, unfriendly recluse Rubin Farr in Rubin and Ed, Layne in River's Edge and much more.

Crispin Glover was born as Chrispin Hellion Glover on April 20, 1964, in New York, New York, United States of America. He belongs to white ethnicity and holds an American nationality.

Glover was born to Betty Glover and Bruce Glover who is famous for his role as Mr. Wint in the 1971 film, Diamonds Are Forever. His mother is of German & Czech ancestry, and his father is of English, Czech, and Swedish descent.

Glover joined The Mirman School from first grade to ninth grade. Later, he enrolled in Venice High for tenth and eleventh grade and also attended Beverly Hills High School for twelfth grade and graduated in 1982.

Crispin Glover began his acting career since 1977 at the age of thirteen. He debuted with the 1983 American sex comedy film, My Tutor as Jack.  He appeared in several sitcoms as a teenager, such as Happy Days and Family Ties.

Glover is also the voice of Fifi in the Open Season franchise and appeared in the screen adaptation of the Elmore Leonard novel Freaky Deaky.

He also played a German-speaking clairvoyant during World War I in the Polish-language film Hiszpanka and an unwitting employee in service of Robert De Niro's character in The Bag Man.

In the late 1980s, Glover started his company, Volcanic Eruptions, which publishes his books and also serves as the production company for Glover's films, It Is Fine! Everything Is Fine and What Is It?.

Glover was known for his directorial work in 2013 when the Museum of Arts and Design in the New York City staged the series It Is Crispin Hellion Glover.

The program consisted of screenings of all of his directorial work, live performances, and speaking engagements.

Crispin is currently single, but previously he was romantically linked up with numerous girls. In 2004 he was in love affair with Marina Drujko, but the couple couldn't handle their relationship and split apart. Then Crispin was linked up with Fairuza Balk.

Crispin Glover has appeared in several movies and television series to date.  He has earned a huge amount of salary from his career which adds up to his net worth is around $3.5 million.