Pittsburgh-born Courtney Laine Mazza is an American actress, dancer, and producer who has been active in the entertainment industry since 2006. Despite of her own identity, she gained huge popularity for being the wife of Mario Lopez, an American actor and TV, and radio host.

How Old Is Courtney Laine Mazza?

Courtney Laine Mazza is 39 years old as of February 2022. She was born on 13 October 1982 in Pittsburgh, Pennsylvania, the United States of America.

The American citizen holding the birth sign, Libra stands at an average height of 5 feet 7 inches tall (170 cm) and weighs around 55 kg (121 lbs).

Moving towards her academics, Mazza is a graduate of Pittsburgh Creative and Performing Arts School.

Courtney is current and second wife of Mario Lopez. The couple exchanged marriage vows on 1 December 2012. The destination wedding was held at in Punta Mita, Mexico, in a lavish ceremony with more than 200 guests. Further, the duo shares three children, one daughter, and two sons. The family of five share a healthy relationship. 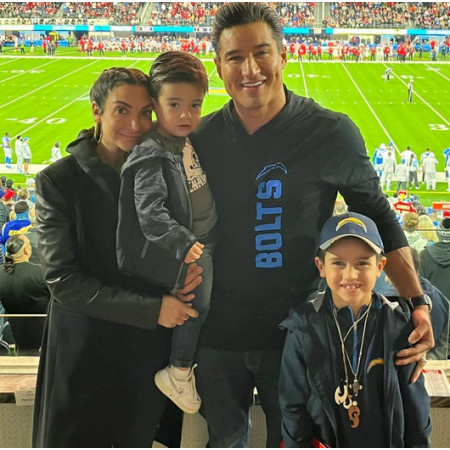 Additionally, Lopez has dated many ladies before tying the knot with Courtney. The 5 feet 10 inches tall actor c u m host dated Fergie. Also, he was in a short relationship with Karina Smirnoff, his dance partner in the TV show Dancing with the Stars.

Mario Lopez is an American actor and TV and radio host. He was born on 10 October 1973 in San Diego, California, the United States, to parents Elvira Soledad Transcona and Mario Alberto Lopez Perez. Similarly, his younger sister is Marrisa, who is best recognized for being the spouse of Kailee Wong.

Moving onwards, Lopez is a graduate of Chulavista High School. Similarly, he used to play tumbling, karate, and wrestling from a young age. Further, his Instagram handle is flooded with his fitness videos. He is very enthusiastic and dedicated to a healthy life. Also, he has written books like Mario Lopez Knockout Fitness, Extra Lean Family, and Mario & Baby Gia.

The mother of three is estimated to have around $2 Million. Her major income source is her showbiz career. Further, Courtney has 355 thousand followers on her Instagram account, and her per sponsorship earnings are $1059- $1765, with an engagement rate of 1.13%. She has collected good money from movies and TV shows like Earano and Ashley Gracia: Genius in Love.

Meanwhile, her better half, Mario Lopez, has $25 Million. His annual income is reported to be around $3.5 Million. His major income source is his showbiz career starting from 1984. Similarly, Lopez has added good profit to his name from movies and TV shows like Saved by the Bell, Holiday in Handcuffs, Access Hollywood, Extra, A Recipe for Seduction, Holiday in Santa Fe, Candy Crush, and more.