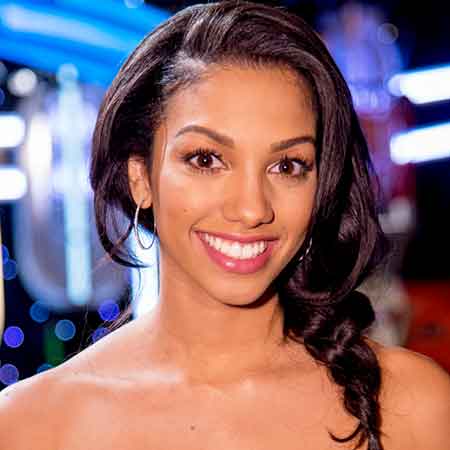 American model, Corinne Foxx is popularly known as the daughter of American sensational personality, Jammie Foxx. She debuted in the entertainment industry from an early age of six. Foxx also appeared with her father on the red carpet. She is dating her longtime partner, Austin Lantero since 2015.

Corinne Foxx was born Corinne Marie Bishop on 15th February 1994 in Los Angeles, California as the second child of her parents. Foxx's birth sign is Aquarius.

She is the daughter of Eric Marlon Bishop aka Jamie Foxx and Connie Kline. Her father is a renown personality of Hollywood whereas her mother is an Air Force veteran who prefers to live a low-key life. Her parents had a relationship in the early 90s and separated for some undisclosed reasons. She has a younger sister, Annalise Bishop.

some people meet their best friends in middle school, some people meet them in their later years... I met mine in day care and I got to celebrate her graduation from UCLA today. 19 years strong! I love you @jorgiaxo and couldn't be prouder of you. #besties

Foxx attended Sierra Canyon School where she appeared as a cheerleader and also featured on the cover of American Cheerleader in 2011. She then joined the University of Southern California where she studied PR. Later, she attended Howard Fine Acting Studio and the American Academy for Dramatic Arts. Moreover, she was also a member of the Pi Beta Phi sorority.

Corinne Foxx started her career in an entertainment industry from the very early age of six making a cameo in The Jamie Foxx Show hosted by her father. From the early age, she appeared on the red carpet with her father.

At the @amas last night with @iamjamiefoxx

In 2014, Foxx made her modeling debut at the Bal des Debutantes. Later, she represented several renowned brands including  Dolce & Gabbana, Ralph Lauren, and Kenneth Cole among others. She made her New York Fashion debut in 2016 where she walked for Kanye West's Yeezy line.

The same year, she served as Miss Golden Globe. She also announced about her being Miss Gloden Globe:

FINALLY! I am able to announce that I will be Miss Golden Globes 2016. What an amazing honor! @goldenglobes pic.twitter.com/lsP5z1XQO8

As of 2018, Foxx worked as a DJ in Fox's TV game show, Beat Shazam. Also, she landed a role in her father's directional debut movie, All-Star Weekend.

As per some online sources, a model in the US earns an average salary of around $32k to $48k based on the level of tenure.

The ravishing model, Corinne Foxx is dating her longtime boyfriend, Austin Lantero since 2015. The couple posts several pictures together on their social media.

wouldn’t want to start the new year with anyone else

On 14th February 2016, the couple celebrated their first Valentine's Day,

s/o to the best Valentine out there. Thanks for making this weekend so special @austinlantero

She is an activist, worked with the National Alliance on Mental Illness to reduce mental issues. She also works in the United Nations Foundation's Girl Up! Campaign to promote gender equality.

Foxx formed a website, foxxtales.com where she writes about several topics including wellness, travel, and lifestyle. She also provides female artisans a platform to sell their creation.

Check out the video of Corinne Foxx and her father, Jamie Foxx: