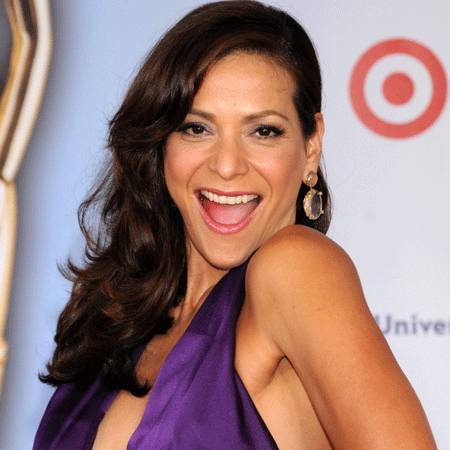 Constance Marie, an American actress, is famous for appearances in several films and TV series. She is best known for her role as Angie Lopez on American sitcom George Lopez and her role as Marcela Quintanilla (mother of Selena) in the 1997 biopic musical drama film Selena.

She is a good friend of producer/director Edward James Olmos. She currently, portrays Regina Vasquez on the ABC Family drama Switched at Birth.

Constance Marie Lopez was born on September 9, 1965, in East Lost Angeles, California, US. She is of White -American ethnicity. Marie was an enthusiastic dancer since her early childhood.

At the age of 19, she appeared in the musical ‘Cosmopolis’ by composer Ryuichi Sakamoto, as a dancer in Japan. After returning to her hometown in Los Angeles, a dance choreographer for David Bowie spotted her in a club. In 1987, she was hired for the Gla s s Spider Tour.

Constance Marie’s career in both small screen and the big screen started thriving when as a teenager in Los Angeles' underground breakdancing scene, she was selected out of a group of 500 hopefuls to dance in David Bowie's Gla s s Spider Tour in 1987.

The next year, she was cast as a dancer in the movie Salsa. During that time, she was introduced to Steve Tisch. He gave Marie her first acting job ever, as a series regular on CBS's short-lived Dirty Dancing (1988) as Penny. Despite being her first acting career, she did an amazing work.

Constance Marie’s desire then went from performing in TV shows to performing in feature films. In 1995, she portrayed Toni Sanchez in the critically recognized 1995 Newline feature My Family, directed by Gregory Nava.

The project was also the first of many times Marie has worked with fellow actor and friend Edward James Olmos. Not much later, Marie earned a decent fan base, when she starred in the blockbuster film Selena(1997) as Marcella Quintanilla.

Before that, she also played the role of Gabby in the ABC series Spin Series. She also found herself starring as Gabriella Diaz, on another short-lived series Union Square.

After the cancellation of Union Square, Constance Marie quickly jumped into another role, as Detective Toni Brigatti on Early Edition. In 1999, she appeared in two episodes of Two Guys, a Girl, and a Pizza Place.

In 2000, she had a recurring role in For Your Love. In 2001, she portrayed Inez Cortex, a salsa champion on Ally McBeal. Since then, she has had roles in The Underworld, See Spot Run, and Dancing in September. In 2002, she juggled between two prime series: American Family and George Lopez.

Then, she appeared in other films and TV series including Puff, Puff, Pa s s, Puss in Boots and CSI. In 2017, she appeared in the television series Lopez alongside George Lopez, Maronzio Vance, Ray Diaz and other stars.

Marie was engaged to her boyfriend/fiancé, Kent Katich, for 15 years. They broke up in September 2015 and have a daughter named Luna, who was born in February 2009. As of now, she has a net worth of $5 million.