Colton Haynes Engaged with his Partner Jeff Leatham in 2017,Know about their Relationship 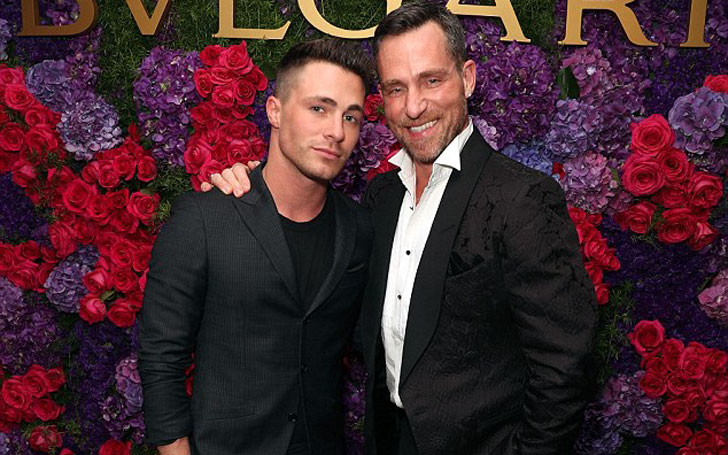 The definition of love has taken a drastic change in today's world where love is not just confined to opposite sex. Homosexuality is not a product of the modern era, it was always there, but the more accepting laws and legalization of same-sex marriage in many countries across the world have helped people come out publicly and leave with pride.

Coming out as LGBTQ is quite a big thing in Hollywood. The American actor, model, and singer Colton Haynes who's come out some time ago is engaged! And we have some exclusive details here!

28 years old star Colton Haynes got engaged to his boyfriend Jeff Leatham on 11 March.He took to Instagram to share his happiness with his millions of fan.

In his Instagram post, he shared a  photo of them two kissing in a romantic firewood background and he captioned it:

Haynes said to PEOPLE, "I'm so blessed and happy for the future and my life together with Jeff,"

According to a source,46 years old Leatham proposed Haynes at  Las Ventanas al Paraiso in Cabo San Lucas, Mexico with the help of singer Cher.
The movement turned into special not only due to the romantic background but also due to the video in which Cher sang their favorite song, "I Got  You , Babe,".
After Haynes said yes firework display was set following a song "Marry You" by Bruno Mars.
And that tops the list of best proposals ever!!!

The Teen  Wolf  actor also thanked Cher  through his  Instagram  post in which he writes;
“Thank you @cher for the beautiful ‘I got you babe’ proposal lead in, you sounded incredible as always :) The most special night of my life.”
The newly engaged couple shared their romantic love stories on their Instagram stories.Colton said following in the video.

“Jeff, you’re crying, You’re the sweetest person in the entire world. I can’t believe you.”

Leatham made a candle path which leads to rose petals made into a heart. He wrote, “Love yep he’s the one.”

Haynes’'. Friend Ally Maki shared a screenshot of the picture in which the actor showed his engagement ring.

Haynes confirmed his relationship with Leatham officially through his Valentine Instagram post.Haynes shared a picture in which they were embracing in the middle of rose petal heart on Valentine day in a romantic sunset.He also frequently shared their picture together.

The most special day of my life. Thank you @jeffleatham . We were actually in the clouds...speechless. Happy Valentine's Day to all of you. #LoveWins ?????? Never be afraid to love harder.

For more updates on Colton Haynes' relationship and other celebrity news, keep coming back to Article Bio.