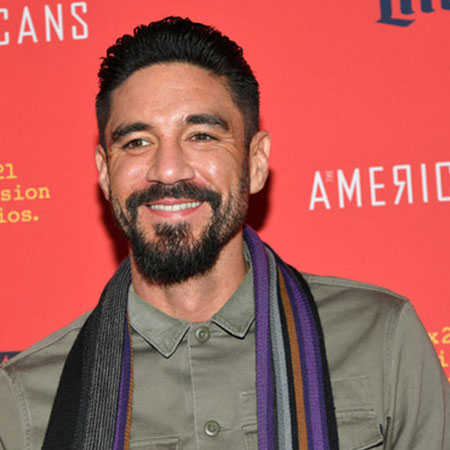 After many years of veterans and established actors ruling Hollywood a young man has brought a breath of fresh air into the industry and he is none other than American actor Clayton Cardenas. He debuted with the short film "Nice Guys Finish" in 2014 and acted in the series "Out the Box" as his TV debut in the same year.

Clayton Cardenas was born on the 24th of November 1985 in West Covina, Los Angeles, USA.  As a Sagittarius, he has traits like being open-minded and philosophical.

He was born to a Filipino-Mexican mother and his father’s information has not been revealed to the media. He is of mixed ethnicity and is American by nationality. He grew up with a sister named Janae Clayton.

Cardenas is famous for playing roles in the series such as Mayans M.C., but he started his career via a short film called Nice Guys Finish on March 23, 2014. Then in the same year, he also debuted on the silver screen on July 3, 2014, with a show called Out the Box.

He is best known for his appearance in the Sons of Anarchy spinoff called Mayans M.C. The original Sons of Anarchy had a star cast full of members like Kim Coates, Titus Welliver, Charlie Hunnam, and Katey Sagal. According to IMDB, he has two upcoming projects for 2019 that are still in development. He has an upcoming role as Lucky in East Los and Darrell in From the Tree.

The following is a video of 'Mayans M.C.' stars JD Pardo, Edward James Olmos, Clayton Cardenas and more talking about the show.

Cardenas is an actor whose fame has skyrocketed after his role in the Sons of Anarchy spinoff. However, he has not revealed his net worth to the public. In fact, he has not even disclosed his earnings from the films and TV shows he has done.

His 2017 film Khali the Killer grossed $1 million in the U.S. Similarly, his debut short film grossed $2000 and his second endeavor, House on Lockdown also a short film, gathered $5000 too. Notably, the 2015 film, Actor for Hire, in which he worked as an executive producer grossed around $100,000 in the U.S box office.

Dating Anyone Or Single?

Clayton Cardenas is a very hunky man, he is what some people would describe as ruggedly handsome but due to the lack of evidence of a romantic partner on his social media or news we can a s sume that he is single.

He caught the eye of many people due to his rugged features and charming personality, but he hasn’t revealed anything about his relationships and who he might be dating. It is hard to think that an actor in the spotlight like him would have already been in many relationships.

He is a low-key person and hasn’t shared details of his love life to the public. In the near future, he may lift the curtain on his mysterious dating life and may even have a wife but as of now, he has kept his lips sealed.