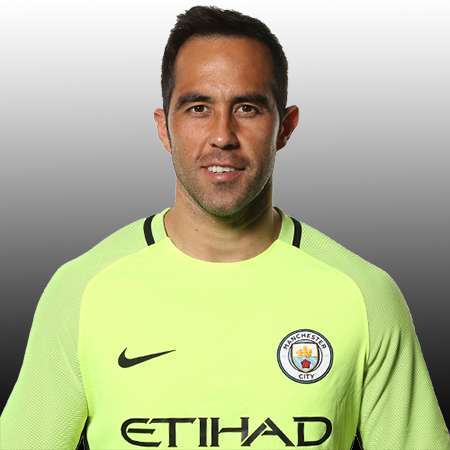 Claudio Bravo is a goalkeeper in the world football arena from his Nation Chile where his current team is Chile National Football Team and Spanish club of Primera Division, Real Sociedad in La Liga. Claudio Andres Bravo Munoz is a Chilean goalkeeper wearing squad number 1 in both of his current team.

He started his playing career with Colo-Colo and moved to Real Sociedad in 2006. He has appeared 237 official games with Real Sociedad. He is Chile's second most capped player of all time after Alexis Sanchez with over 115 appearances since his debut in 2004.

He has represented the nation in two World Cups, a FIFA Confederations Cup and five Copa América tournaments. He captained his side to victory at the 2015 and 2016 editions of the Copa América competition.

Claudio Andres Bravo Munoz was born on 1983 April 13 at Viluco of Chile. The 31-year-old Goalkeeper has an active right foot in the game. His market value is reported to be 4.000.000 Euros with an undisclosed salary report.

In the early age of Claudio Bravo, his father was impressed with his football skills leading this talented footballer to get admitted in the youth academy of Coco-Colo to sharpen his talent. He made his professional debut from this club during the year of 2002.

In this club, due to his outstanding performance as the goalkeeper, he was given the nickname of Condor Chico, after the former Goalkeeper Roberto Rojas. He played for Colo-Colo until the season of 2006. During this time, he made 133 appearances for the team.

In 2006, Claudio Bravo signed with the Spanish Primera Division Real Sociedad Club. He is in this club for more than seven years now. He has appeared in 224 matches representing this club.

In 2010, being a Goalkeeper, Claudio Bravo scored his first ever goal in the football career against Gimnastic de Tarragona from a direct free kick. He has been playing for Chile since 2004 in the Chile National Football Team.

He has appeared in 78 different international matches representing Chile. He made his debut for Chile National Team in 2004 playing against Paraguay in 2004 Copa America. He played for all the matches in 2006 FIFA World Cup qualifiers.

After playing 2007 Copa America, Claudio Bravo became the captain of the Chile National Football Team. Chile had played 2010 World Cup in South Africa under the captainship of Claudio Bravo.

During his career, as per the report made by media, it is reported he had been injured several times. The significant one was his two months leave due to Intra-articular ligament crack initiation in the knee in the season of 2009/2010.

Another significant injury history is fractured arm in season 2012/2013 which made Claudio Bravo take rest of 1 and half months. In the current season of 2013/2014, Claudio took rest of about 10 days due to an undisclosed injury.

Claudio Bravo's Net Worth And Salary

Claudio Bravo's net worth is over $5 million at present. He earns an annual salary $1.2 million from his successful playing career. His current market value is $4.1 million.

This talented Chilean goalkeeper is fantastic in saving long shots. He has got excellent acrobatic skills which made his aerial activity to be impressive while saving the shots. He has a good command of the goal box.

He has got amazing reflexes, kicking skills and sense of positioning. He is also good at saving the penalties. He is one of the best goalkeepers for the world football arena having no significant weaknesses.

However, interestingly, he is considered to be eccentric to some people. The Chile National Football Team is playing in 2014 FIFA World Cup under the captainship of Claudio Bravo and management of Jorge Sampaoli.

He cherishes the height of 1.85 meters and weighs of 84 Kg. He is best known for his leadership, agility, composure, and shot-stopping ability, as well as his control, distribution, and skill with the ball at his feet.

He is married to Carla Pardo in 2007. He is living a happy married life with his wife Carla.