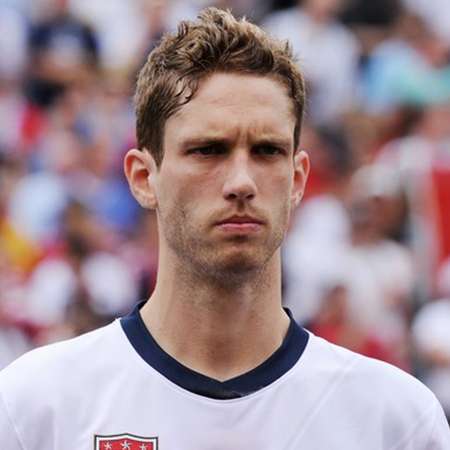 Clarence Edgar Goodson IV popularly known as Clarence Goodson is an American soccer player, born in the year 1982 May 17 at Alexandria, Virginia, USA. Jan Goodson and Clarence E. Goodson III is the name of his Parents. Jenna Goodson is the name of his Sister Siblings. He is 32 years old having height of 192 cm and has the body weight of 88 Kg. He was born and brought up in America. He made his professional debut in the year 2003. According to the Salary statistics of 2012, the Salary of Clarence Goodson is reported to be 729,500 US Dollars. His Current Net Worth is 442 Tsd. The name of his agent is James Grant Sports Management. He is a married man. Kelsey Dawson is the name of his Spouse. They got married in 2009 in Tacoma, Washington. HGTV’s House Hunters International featured this couple in their one episode as they were searching for an apartment in Copenhagen after Goodson got transferred to Brondby IF. He spent 900,000 US Dollars to buy an apartment. Clarence Goodson is Christian by faith and participates in team Bible Study every week.

Clarence Goodson prefers his right foot while playing in the soccer field but performs well from his weak foot as well. He is very strong and energetic. He plays from the main position of Defender/ Centre Back. Clarence Goodson has good control on the ball. He is good at headers and passes. His standing tackles are nicer than the slides. He is enthusiastic and energetic one. He is skilled in defending. He has good speed, balance and agility in the field. He is not the popular name in the international Soccer world.

Clarence Goodson used to play soccer from his young age. Clarence Goodson attended Annandale High school for the starter before moving to Wilbert Tucker Woodson High School. He started his youth career from the Maryland Terrapins, the club of University of Maryland, College Park, in the year 2000. He spent three years in the team. He played in 66 matches from the team bagging 10 goals and 11 assists. In 2003, he made his professional debut joining at Boulder Rapids Reserve. He spent the collegiate offseason at this club moving to FC Dallas in 2004. He signed the 3 years contract with the club. He appeared in 74 matches from the team with 3 goal scores.

After the end of his contract with FC Dallas he joined with IK Start in the year 2008. He spent two years at this club appearing in 69 matches with 10 goal scores. In 2011, he was transferred to South African Club called Brondby where he spent 2 years of his professional career appearing in 60 matches with 6 goals. After the release from his contract, he joined with San Jose Earthquakes in 2013. He is in the Current Team of San Jose Earthquakes. He plays as a Defender from squad No.44. Clarence Goodson is playing in United States Men’s National Soccer Team since 2008. He has appeared in 46 cap matches with 5 goal scores so far. He had played in 2010 FIFA World Cup. He is in the squad in 2014 World Cup as well.