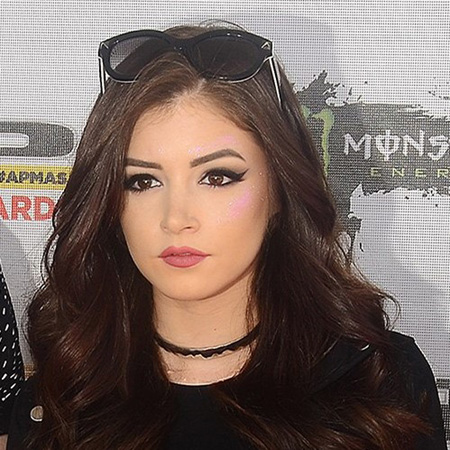 Chrissy Costanza is the lead vocalist of the band, Against The Current and has also collaborated with Alex Goot and Kurt Hugo Schneider on the covers of hit songs from renowned artists including, Carly Rae Jepsen and Justin Bieber as well.

The lead vocalist, Chrissy Costanza was born on August 23, 1995, in New Jersey, United States of America. Regarding her nationality and ethnicity, Chrissy is a White American.

Chrissy was raised up in her hometown, New Jersey along with brother Mikey who is an active supporter of his sister and the rest of the band members of Against the Current. Her mother’s name is Elizabeth.

Chrissy Costanza is a lead vocalist for the New York-based pop-rock band, Against the Current. She launched the Against The Current’s album Infinity, on May 3, 2014.

In the year 2011, Chrissy joined the album after she became a mutual friend with bandmates, Daniel Gow and Will Ferri. In addition to a member of the band, she has a popular blog and tutorial channel on YouTube.

The 22 years old, Chrissy Costanza is yet to be married. However, Chrissy is romantically involved in a relationship with guitarist, Cameron Hurley from We Are the In Crowd. The couple began dating in 2017.

Chrissy and her boyfriend Cameron both are more active on social media. Recently Chrissy shared a picture of a passionate kiss with Cameron. It seems the couple is in a romantic relationship.

Besides, her favorite animal is a lion. She loves playing zombies on black ops 2 Chrissy Costanza.

Chrissy Costanza has garnered a huge amount of net worth from her career as she is an active member of New York based pop rock band, Against the Current and as a YouTuber. As of 2017, Chrissy’s estimated net worth believed to be $1 million. She stands at the height of 5 feet 1 inch.