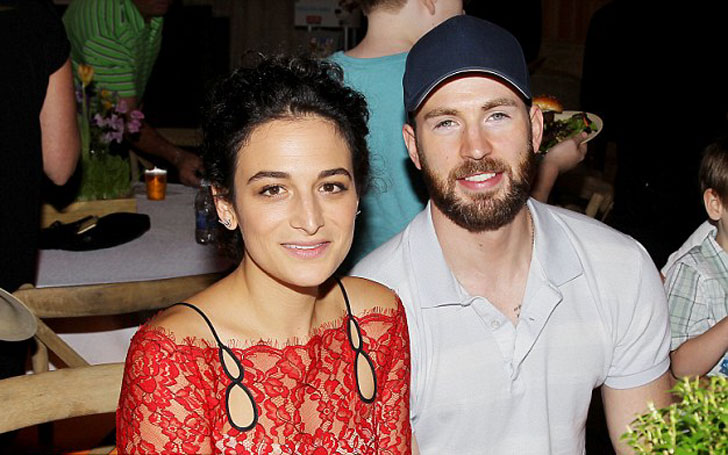 Recently, the past couple triggered reconciliation rumors by exchanging flirty posts on social media. Is it a hint to their fans? Has Jenny Slate become Chris Evans' girlfriend once again?

Let’s get into it and see what the fuss is all about!

Are Chris Evans and Jenny Slate Getting Back Together?- Flirty Messages Alert!

Chris Evans and Jenny Slate had called it quits back in February, after dating for nine months! Now, fans are speculating that the duo could be getting back together. The Gifted (2017) movie couple are quite flirty on Twitter these days.

It all started when Chris Evans tweeted about the theme song to the series Mash (1972–1983):

The theme song to Mash stresses me out. The Pavlovian response is that it's time to go to bed and I probably haven't done my homework.

To which his former girlfriend Jenny Slate tweeted back saying,

Tweets between the former flames Jenny Slate and Chirs Evans

It is sweet and sexy at the same time! Something's brewing here.  Well, this is not the only time Slate and Evans have given their fans hope of getting back together- a couple of weeks ago, on October 13, they were together at central Atlanta ''grabbing a bite to eat.''

Us.Weekly stated that an eyewitness saw the two together and they did look like a couple.

In the  eyewitness' words:

Well, until and unless they don't speak about it we know there is no stop to such speculations.Whether or not they are together, one thing is pretty clear- they are so good together and in friendly terms even after the breakup. So, why did they break-up in the first place?

Why Did Chris Evans and Jenny Slate Break Up?

He was Caption America, and she was classy, sexy and a bit nerdy, and they needed nothing else to make a perfect couple! But, the couple ended the hope they gave to Hollywood of a genuine couple as soon as they sparked it.

Chris Evans and Jenny Slate came together as a couple and broke up a year back. It was a very mature relationship, and they maintained that even when they broke-up. Talking about the breakup, Slate has said:

I feel pretty relaxed about it right now because I know Chris and he's a very nice man. And we've gone into our separate lives. But that doesn't also mean that I'm going to sleep well the night before, you know?