Charlotte Vega is a rising Spanish actress and model turned professional since 2010, who grabbed huge attention for portraying Rita Aranda in the TV series El secreto de Puente Viejo (2013-14). Throughout her career, Vega worked in the TV series The Refugees, Velvet, and Lo que escondían sus ojos, and has made film appearances in The Misfits Club (2014), The Lodgers (2017), and Wrong Turn (2021).

Raised in Barcelona, Vega holds Spanish nationality and is from a multicultural background- her mother is British while her father is Spanish/British. Her paternal grandparents were from Andalusia. Charlotte has a brother. During an interview in 2018, she revealed that the influence from her parents enabled her to speak both English and Spanish.

The 26 years old actress started her acting career in 2010. However, she grabbed huge attention for appearing in the 2012 movie REC 3: Genesis. The following year, she appeared in movies like Los Inocentes and Another Me. The same year, she appeared in the television series El Secreto de Puente Viejo.

Charlotte has starred in movies like The Misfits Club, The Bookshop, Danielle, Proyecto Tiempo, The Lodgers, American Assa s sin, Provenance, La Banda, and many others. Similarly, she has appeared in television series like The Refugees (2014-15), Velvet (2015), and Lo que escondian Sus Ojos (2016).  The Spanish actress has shared the screen with actors such as Natalia Tena, Dafne Keen, Miguel Ángel Silvestre, Loreto Mauleón & others. 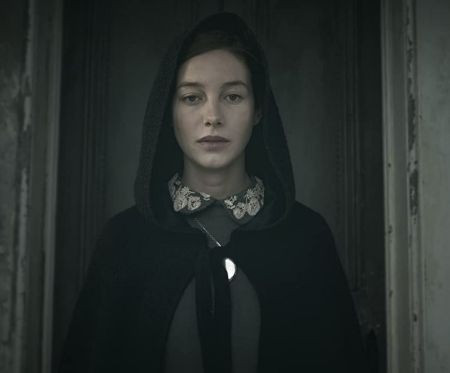 CAPTION: Vega as Rachel in the film The Lodgers (2017) SOURCE: IMDB

How Much Is Charlotte Vega’s Net Worth?

According to online sources, Charlotte Vega has a net worth of $4 million as of 2021. Throughout the career spanning over a decade, Vega won the hearts of many with her promising acting. Notably, she was cast in the TV series El secreto de Puente Viejo, The Refugees, and Velvet.

Allegedly, the actress summed up a salary of tens of thousand dollars per episode from the TV series.

Charlotte loves keeping her personal life away from the media. Vega did not reveal anything about her private life including her dating life and relationships. Often she is seen spending quality time with a guy named Marc Beerhorst, and her The Lodgers co-star Bill Milner, but Vega is yet to confirm if she is romantically linked with anyone.

So far, no report on her boyfriend ever came up. She is alleged to be single at the moment.

The Velvet actress is an avid Instagram (@charrvega) & Twitter (@CharrVega) user with more than 112K and 16.6K followers.