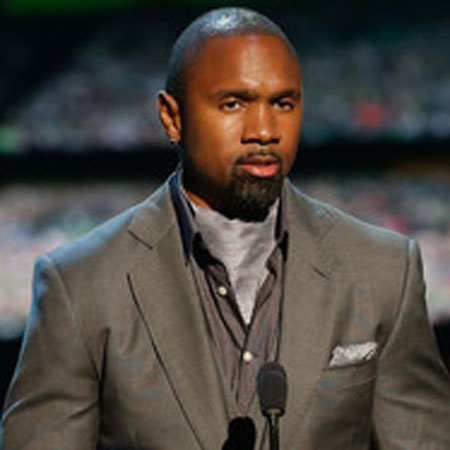 Charles Cameron Woodson is a former American football player. Woodson played college football for Michigan, where he forwarded the Wolverines to the national championship in 1997.

Charles Woodson was born on 7 October 1976 in Fremont, Ohio, U.S. He was born to Solomon Woodson and Georgia Woodson. He is African-American in ethnicity and holds American nationality.

As a senior at Ross High School, he was known as Ohio's ''Mr.Football.'' Woodson made his high school football career debut with the school's record for scoring with 466 points and rushing yards with 3,861.

During his senior season, Woodson became a USA Today All-America selection and Parade High School All-American with 230 points and 2028 yards. Several colleges wanted to hire Woodson as a running back.

Woodson retired from his football career in 2015. He is currently working for ESPN's Sunday NFL Countdown. He will work in the position till 2018 as per the contract.

During his days in the University of Michigan, where he was trained by coach Lloyd Carr of Michigan Wolverines football team from 1995-1997. Woodson was the starter of his freshman season and played in thirty-four straight games.

In 1997, during his junior year, Charles Woodson became the third Michigan player to win Heisman Trophy, joining  Desmond Howard and Tom Harmon. Till date, Woodson is the only player to hold Heisman Trophy.

In the same year, during his game against Washington State Cougars in the Rose Bowl, he recorded an end-zone interception in the game, which helped Michigan win over the Cougars and win a share of 1997 national championship.

When he completed his college career, Woodson ended up with 18 interceptions and 30 passes defended.

Charles Woodson was confident of falling in NFL Draft following his junior season at Michigan, he was chosen 4th overall in the first round of the 1988 Draft by the Oakland Raiders.

After he was selected as the NFL Defensive Rookie of the Year by the Associated Press, Woodson was listed to the Pro Bowl and achieved All-Pro recognition three times, 1999-2001.

In 2002, he had his first big injury since his freshman year at Michigan. He had a shoulder injury and couldn't attend eight matches. The shoulder injury occurred during the first half of the season.

Despite the injury, he played several matches for Oakland, he departed after the 2005 NFL season.

On 26 April 2006, Woodson signed a 7-year contract, which could be worth $52 million including bonus and incentives, with Green Bay Packers where he later achieved victory in Super Bowl XLV over the Pittsburgh Steelers.

During his first season with the Green Bay Packers, Woodson was a punt returner and forwarded the National Football Conference with eight interceptions. In his second season, his shoulder injury rose again, and he was forced to be out of two games.

See you at the White House!

He had a pep talk in the locker room with the former president. Packers won the Super Bowl, but could not visit the White House until August due to the terms of NFL Lockout. Later when he visited the White House, Barack Obama made a reference to Woodson's pep rally and autographed a jersey.

Woodson responded by handling Obama a certificate that states Obama is the minority owner of the Green Bay Packers. Obama also stated:

I have learned something that many quarterbacks have learned. Dont mess with Charles Woodson.

On 9 September 2010,  Woodson was offered a two-year extension by the Green Bay, adding five years and $55 million to his existing pact.

On 21 May 2013, Charles Woodson signed a one-year contract with the Oakland Raiders. Later on 26 Jan 2015, Oakland Raiders announced via Twitter that they had agreed to a contract for his comeback in 2015.

During the season, Woodson emerged to strong safety, after the switch, Woodson became one of the few players in NFL history to play at all three positions in the secondary.

On 12 Feb 2016, ESPN announced that Woodson would be serving on ESPN's Sunday NFL Countdown replacing Keyshawn Johnson for the next season.

Charles Woodson is married to April Woodson. From the marriage, the couple shares two sons together, Chase Woodson and Charles Woodson Jr.  Currently, Woodson lives a  happy life with his wife and children.

Charles Woodson makes money as a commentator, from pensions, and incentives. During his football career, Woodson had an average salary of $3,200,000 per year.

Charles Woodson owns a house worth $6 million. The house is in a large area with a swimming pool and a basketball court. He also owns a Chevrolet SUV worth $50,150. As of 2017, Charles Woodson's total net worth is estimated to be $71 million.