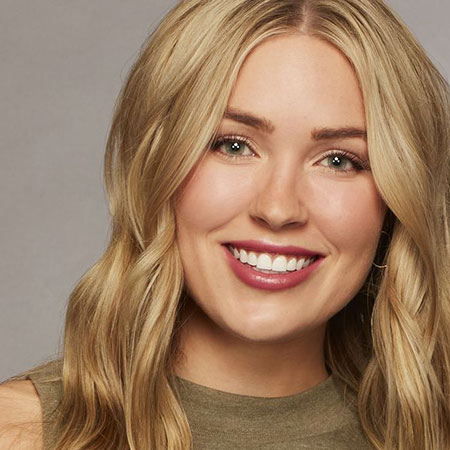 The Bachelor star, Cassie Randolph came to limelight after she was declared the winner of the 23rd season of the American reality series. She also made a notable appearance in 2016 in the reality web series Young Once. Prior to joining reality shows, she worked as a speech assistant.

Beyond thankful for this little bunch of humans

The reality star completed her schooling from the Berean Christian High School. Then she joined Biola University and graduated in communication sciences and disorders in 2016. Later, she worked at the Huntington Beach Union High School District as a substitute ESL teacher.

In addition, Randolph will complete her master's degree by 2020 in speech pathology from the University of Wisconsin–Eau Claire.

Cassie Randolph started her TV career in 2016 from reality web series, Young Once but she rose to fame after appearing in the 23rd season of The Bachelor, starring former footballer Colton Underwood.

In December 2018, ABC announced Randolph as a contestant of the 23rd season of The Bachelor. Her performance in the show was well-received by the audiences, however, at the end of the season, she decided to quit the show after realizing she wasn't ready to get engaged.

Cassie, however, rejoined the season in the following episode after Underwood promised her that he would not propose her and break up with other finalists to be with her. In the end, Colton chose her as the winner of the season with no proposal on the final episode on March 12.

Randolph was a contestant in The Bachelor 23, but she wasn't paid for her appearance. But, her beau, Colton Underwood made roughly $100,000 for the season filming. Moreover, his net worth is $450,000.

Cassie Randolph is in a romantic relationship with her boyfriend, Colton Underwood. The duo is together since their The Bachelor journey. In their short relationship, they have already faced many ups and downs.

CAPTION: Colton Underwood and Cassie Randolph at the interview just after the finale of The Bachelor. SOURCE: E-online

During the show, when Underwood went to meet Cassie's family, her father wasn't happy with him and didn't give their blessing to him. When Colton shared the incidents to Cassie, she said she was confused as her fathers' approval was important to her. Later, she quit the show which made Colton jump the fence to return her to the show which was heavily covered by media.

Later, Cassie came back to the show and their romance blossomed again. Eventually, they ended the show as a power couple on the show. She often shared cute PDA with her partner on her Instagram where she has garnered over 1.6 million followers so far.

I was going to wait until west coast aired to post this, but I am too impatient. So here it goes! The secret is finally out!!! Colton, you truly have my heart  Walking into this experience, I honestly wasn’t sure that true love could come from it. It hasn’t necessarily been the easiest road to get to where we are, but if that’s what it took to get here, then every single twist and turn has been undeniably WORTH IT. The last 4 months, just focusing on “us” have been amazing and you have become my best friend. You have shown me the purest, strongest love that any girl could ask for. You jumped a fence, took a risk, and challenged the “rules” to fight for us. I can’t even begin to describe how lucky I feel to have you by my side. I am so excited to see what is next for us in this new phase of our “journey”... I’d jump a thousand fences for you and “like, I know, I KNOW” that I love you more than words, point blank ps. you still give me butterflies

The reality star is an avid cat lover and has two cats Maverick and Goose. She also shares a good bonding with her sister whom she refers as her best friend. Cassie loves skydiving and says it is the most outrageous thing she's ever done.