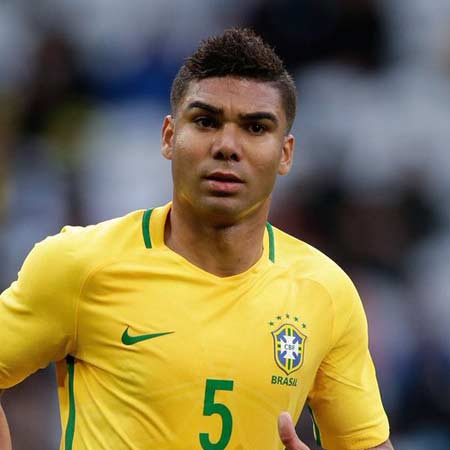 The defensive dynamo in Real Madrid's Midfield, Casemiro has been an integral part in Zidane's hattrick triumph of Champions league. Born and raised in Brazil he was re-bought by Real Madrid after initially sending him to loan on Porto. Rebought by Rafael Benitez to provide defensive balance in attacking Madrid side, he really thrived under Zinedine Zidane and made midfield position his own, forcing Madrid to loan talented James Rodriguez to Bayern Munich.  Compared to Madrid legend Makalele, Casemiro has excellent tackling and ball distribution.  He is the one that provides defensive balance in the attacking midfield of Real Madrid. He is included in 23 man squad of Brazil national team to represent in the World Cup 2018 in Russia.

He scored his first professional goal for Sao Paulo against Cruzeiro Esporte Club on 15th August on a 2-2 draw. During his three senior seasons at Sao Paulo, he appeared 62 times and scored six goals. He then was loaned to Spanish giants Real Madrid which was made permanent after six months of his arrival in the Spanish capital.

At first, Casemiro was assigned to B team of Real Madrid. After impressive performances, he was handed the first-team debut on 20 April 2013 in La Liga in a 3-1 win against Real Betis. To get more first-team action, Casemiro was loaned to FC Porto during 2014/15 season. He made forty appearances in all competitions for the Portuguese outfit and scored four goals from the midfield.

On 5th June 2015, Casemiro returned to Real Madrid. After his return, his contract was extended until 2021. On 13th March 2015, he scored the first goal for Real Madrid in a 2-1 victory against UD Las Palmas.

After the appointment of Zinedine Zidane as a head coach, Casemiro made midfield position his own. He appeared 11 times in UEFA Champions league that year as Real Madrid were European Champions for a record 11 times.

2017/18 season was not good for Real Madrid in the league as they finished 3rd in the table behind winners Barcelona and arch-rivals Athletico Madrid. However, they won their 3rd consecutive and overall 13th Champions league title. Casemiro appeared 48 times over the course of the season and scored seven goals.

Casemiro appeared in Brazil National team in Under 17 and Under 20 team. He also featured in Under 20 Brazil team at the 2011 South American Championship. He altogether made 15 appearances for the Brazillian Under 20  team and scored three goals.

He made his senior debut for Brazil National team against arch-rivals Argentina on 14th September 2011 when he was just 19 years old. He was also included in 2015 Copa America Squad but did not play any matches.  As per 2018, he has appeared 22 times for Senior side.

He is included in 23 man squad of Brazillian National team going to FIFA Worldcup 2018 Russia.

Casemiro earns $119,427 as a monthly salary from Spanish club Real Madrid.  His estimated net worth is about $10 Million.  Casemiro has a huge home in his home city, Sao Paulo.

He also endorses Nike brand and wears Nike's Magista Opus 2 during the games. His Car Collections include Audi and Range Rover.

Casemiro is married to the love of his life Anna Marian Brahm, a native Brazillian. The couple tied the knot on June 2014. Anna Marian was born on 12th July 1989 and is three years older than Casemiro.  She is one of the leading personalities of the Brazillian make-up industry and is also graduate in Bussiness Administration. The couple is blessed with a daughter named Sara Casemiro.

Casemiro's father left the family when he was just five years old. He has two other siblings, one brother, and one sister. His brother's name is Lucas Casemiro and sister's name is Bianca Casemiro.

At the age of 14, Casemiro was diagnosed with Hepatitis. At first, he thought about quitting football however after a long absence with the disease he eventually returned to do what he loved most i.e. playing football.