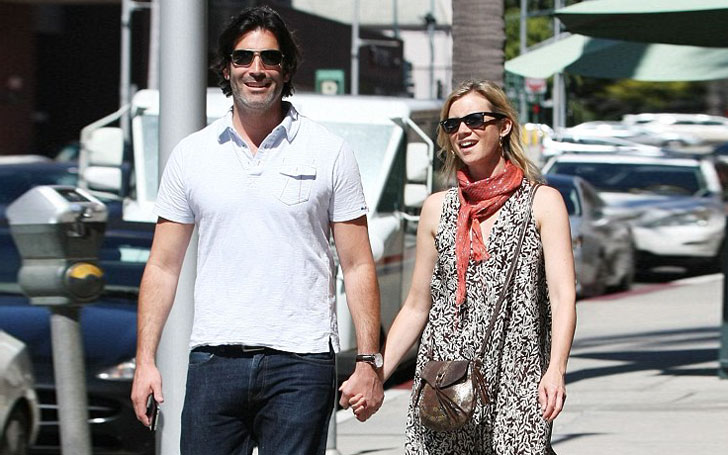 They say marriages are made in heaven. But not every couple is lucky enough to find their loved one and marry them.Model and television personality, Carter Oosterhouse, and actress Amy Smart are one of the lucky couples who were able to marry each other.

Amy Smart recently appeared in a screening of her new movie The Keeping Hours at LA Film Festival in Culver City. She worked in the movie alongside Lee Pace, Carrie Coon, and Molly Hagan. Here we have details about  The Keeping Hours star's married life.

Carter Oosterhouse and Amy Smart exchanged their vows on September 10, 2011. The ceremony was held in Oosterhouse's hometown, Traverse City, Mich. The beautiful bride wore Carolina Herrera for her big day. Amy Smart and Carter Oosterhouse in their wedding

Just after the ceremony, the couple shared their happiness saying:

"We feel so excited and blessed to celebrate this happy day with our family and friends."

40 years old Oosterhouse and his wife Amy Smart are blessed with a daughter. The couple welcomed the little princess,  Floraon, on  26 December 2016 via a surrogate. The 41 years old actress Amy Smart took to Instagram to share her happiness with her all fans on 1 January 2017. She shared a sweet picture of them holding their daughter with a caption that read:

It is with great gratitude and pleasure to welcome our little girl Flora?? to the world. What a blessed way to bring in 2017???? Amen and Thank You God for this special new life!!

The couple frequently makes public appearances and they love to spend quality time with each other. The husband and wife duo were spotted together enjoying a romantic vacation in Italy in May 2016. Since they just had a baby daughter this year, we are guessing Amy and her husband Carter will take a short break from vacationing for this year!

Carter Oosterhouse and Amy Smart on the strict of Rome

Oosterhouse and Smart both appeared in casual outfits and were caught kissing on the streets of Rome. Smart was pictured holding beautiful bouquets of flowers in her hand. We hope to see the couple in a similar PDA mood soon. Or some cute parenting photos!

How did Carter Oosterhouse and Amy Smart Meet?

The adorable couple had their first encounter when they both were working on an environmentalist awards show. However, they didn't fall in love back then. The shameless star shared with PEOPLE:

'We met, and we were both in relationships, so we just remained friends. And then we both got out of relationships around the same time, a year ago this summer. And then a year later we got married.'

She also admitted that Oosterhouse was completely A stranger to her at that time since she was not so fond of watching TV shows. But later their love for the environment helped them to get closer.

Oosterhouse and Smart remained friends at first, but they eventually started dating from 2010. They were first romanticly linked with each other in January 2011 after being spotted getting cozy and kissing at an Art of Elysium event in L.A. The couple got engaged in April 2011.