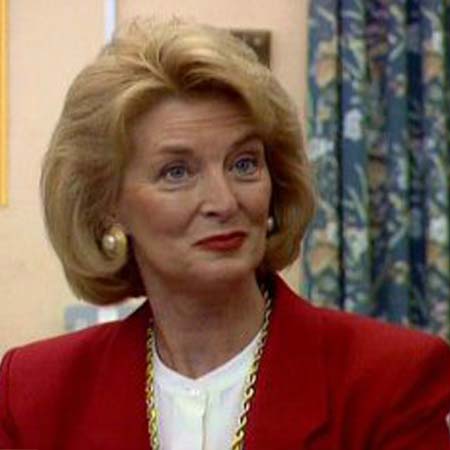 Caroline Blakiston is a veteran English actress who has been active in the acting industry since 1961. She is known for her notable appearances in Star Wars: Return of the Jedi (1983), Scoop (2006) and For Elsie (2011). She has also won a Satellite Award.

Caroline Blakiston was born as Caroline G. Blakiston on 13th February 1933 in Chelsea, London, the United Kingdom, to parents Noel Blakiston and Georgiana Blakiston. Her father was an archivist who pa s sed away in 1985.

She was raised as the only child of her parents. She belongs to White ethnicity and holds a British nationality. Her birth sign is Aquarius.

Caroline Blakiston made her acting debut in 1961, appearing in espionage British television series, The Avengers in the various role. The following year, she was cast in Drama, Sci-Fi/ TV Series, City Beneath the Sea.

In 1966, Blakiston entered Hollywood with the British-West German crime film, The Trygon Factor as a White nun. The same year, she appeared as Eleanor Bastion in an episode of British ITC mystery spy thriller television series, The Saint.

After that, she worked in more than two dozen television series such as The Forsyte Saga, Randall, and Hopkirk (Deceased), Prince Regent, Mr. Palfrey of Westminster’, Agatha Christie's Poirot, Midsomer Murders, and others.

Further, Blakiston portrayed the character of Mon Mothma in 1983 American epic space opera film, Return of the Jedi, alongside Mark Hamill, Harrison Ford, Ian McDiarmid, and others. In Addition, her other movie credits are The Magic Christian, Sunday Bloody Sunday, and The Fourth Protocol among others.

Caroline Blakiston has been active in the film and television industry since 1961. She has appeared in numerous hit movies and television shows. She undoubtedly gets a good amount of money as a salary.

She has gathered a substantial amount of money throughout her career. As for her net worth, according to Idol Net Worth, the veteran actress, who has been acting for decades, has an estimated net worth of $400 thousand, as of 2020.

Caroline Blakiston is possibly single at the present. However, she was previously married to popular Scottish television and film actor, Russell Hunter.

The pair first met during the shoot days of A Midsummer Night’s Dream. After a few dates, the two started a romantic relationship.

After years of dating, Blakiston and Hunter tied the knot in 1970. Unfortunately, the pair are no more together as they have already got a divorce. The date of their split is not available.

The former husband-wife duo shares two children, a son, and a daughter, together.