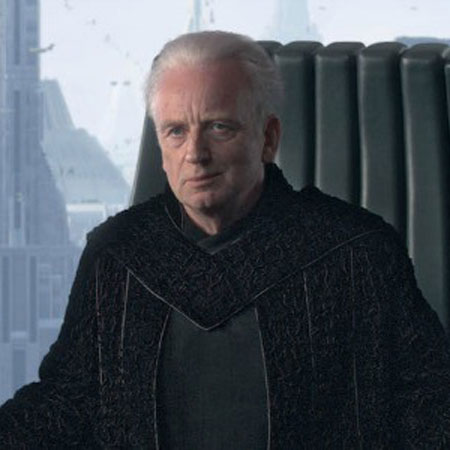 Ian McDiarmid is a Tony and Oliver award-winning director and character actor popular for his role Palpatine in the Star Wars film franchise. The Scottish actor has worked as a Joint Artistic Director of London's Almeida Theatre for over 20-year.

As a trained Shakespearean actor, McDiarmid was also featured in stage productions of Hamlet, Macbeth, Measure for Measure, and several other plays. He started his acting career since 1976 and has appeared in more than 47 movies to date.

Ian McDiarmid was born in Carnoustie, Tayside, Scotland, on August 11, 1944. He belongs to Scottish nationality and ethnicity wise; he is a Caucasian. McDiarmid started to watch plays along with his father when he was only 5-year-old. In 2004, he revealed his first experience of theatre, stating,

"It sort of fascinated me, and it also scared me. All those lights, all that make-up. I said to myself, 'I don't know what this is, but I want it.'"

McDiarmid grew up in his hometown Tayside and finished his schooling from there. He later joined the University of St. Andrews and graduated with a Master's degree in clinical psychology and the Royal Academy in Glasgow.

Ian McDiarmid interest in acting, later made him join acting training lessons at the Royal Scottish Academy of Music and Drama in Glasgow, where he received the prestigious gold medal for his work.

McDiarmid worked as a Joint Artistic Director of London's Almeida Theatre in Islington from 1990 until his retirement in 2001. He made an appearance in a variety of Shakespeare plays like Hamlet, The Tempest, Much Ado About Nothing, Macbeth, The Merchant of Venice and King Lear as well. He also worked as Ivanov in the play of Tom Stoppard Every Good Boy Deserves Favour at the Mermaid Theatre in 1978.

Similarly, for his portrayal of Teddy in a revival of Brian Friel's Faith Healer, Ian McDiarmid received Almeida Theatre's Critic's Circle Award for Best Actor, in 2002. Later, in 2006 he reprised the role alongside Ralph Fiennes and Cherry Jones for which he won the Tony Award for Best Performance by a Featured Actor in a Play.

Ian McDiarmid worked as the artistic director along with English theatre director and opera director Jonathan Kent. They worked together at the same position for more than a couple of decades and shared the Special Evening Standard Award for Theatrical Achievement of the Year. During his time at the Almeida, McDiarmid also directed several plays, including Venice Preserv'd in 1986 and Hippolytus in 1991.

McDiarmid first made an appearance on the big screen featuring in a 1981 fantasy film Dragonslayer. After a couple of years, he made his breakthrough after playing the role Emperor Palpatine in Return of the Jedi.

Ian McDiarmid came to limelight when he featured the character of Darth Sidious in the prequel films: The Phantom Menace, Attack of the Clones, and Revenge of the Sith. He also shared credit in The Phantom Menace alongside Liam Neeson, Ewan McGregor, Natalie Portman, and Jake Lloyd.

Ian McDiarmid has also appeared in several TV series. He worked as Satan in the 41-part BBC Four radio drama based on John Milton's Paradise Lost, in 2005. He featured in the audio podcast drama series Akiha Den Den in September 2016.

The successful Scottish actor and director Ian McDiarmid has an estimated net worth of $10 million, according to celebrity net worth, in 2018.

Here is the list of his successful movie collection:

The former London's Almeida Theatre director, Ian McDiarmid has managed to maintain low-key personal life all these years. He is not exactly very expressive on social media. Thus, there are a lot of unanswered question about his personal life especially about his married life, wife, and children.

Here is a video of McDiarmid taking about his role in Star Wars,