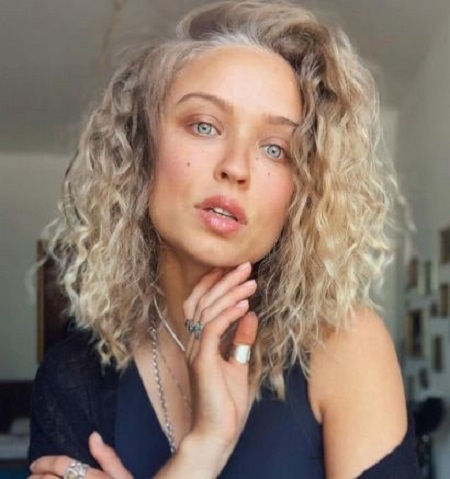 Caro Cult is a rising German actress who came into the spotlight for appearing in Nightlife, High Society, Biohackers, Babylon Berlin, among others. The actress is vegan and is committed to animal welfare. She speaks German, French, and English.

Caro was born on 27th June 1994 in Hanover, Lower Saxony, Germany. Her nationality is German and belongs to a White Caucasian ethnicity.

Caro moved to Bad Nendorf when she was fourteen years old and attended a local high school. She then attended drama school for children and young people.

However, later, Caro dropped out to move to Berlin to pursue an artistic career in 2012. Soon, she worked in music videos and short movies. She appeared in an independent film, Teens on Age.

In 2016, Caro appeared in the movie F**king Berlin and Good to Birds. Since then, she has appeared in many other movies like LOMO- The Language of Many Others, High Society, Interrail, Justice- Entangled in the web of power, My Lotta Life- All Bingo with Flamingo!, and Nightlife.

Regarding television career, she made television debut in 2018, appearing in the series The Law Firm. In the following year, she appeared in Emergency Call Harbor Edge, Einstein, and Erzgebirgskrimi. In 2020, she appeared in The Croatian Crime Thriller, Tatort, and Biohackers alongside Luna Wedler, Jessica Schwarz, Thomas Prenn, Benno Furmann, Zeynep Bozbay, and Eleonore Daniel.

YES BABY! We‘re coming back for SEASON 2 @biohackersnetflix !!! So we‘re all meeting in Munich today for our first read through of season 2! I‘m so excited. From what I could read already we‘ll have some unexpected plot lines, crazy twists and a lot more bodyhacks!!! Thank you guys for watching our show. Welcome to all the people who started following me because of Lotta. I am happy you‘re here. Thanks for all the messages from all over the world that reached me. I am reading them!!! It‘s just a bit hard to answer all of you. But I can see the love and I am thankful!!! 🙏🏼💙✨ #biohackersnetflix

Besides this, she has worked in commercials like About You, Douglas, Kleiderkreisel, and Star Wars: Battlefront II.

Working in the entertainment industry for around eight years and working in dozens of movies and television series, Caro Cult has been able to collect a net worth of $400 thousand.

Besides acting career, she also earns a decent figure of money from commercials, advertisements, and endorsements.

Caro has not disclosed anything about her personal life. She keeps her lips sealed when asked about her dating life and relationships.

While surfing around Caro’s Instagram, she has not uploaded pictures with anyone to claim as her possible partner. Caro’s current relationship status is quite confusing. It is not clear whether she is married or single or dating.