Carly Steel, the British television personality and actress, became engaged to her boyfriend, Jacob Andreou, during their vacation to Paris. The Vice President of Product at Snapchat, Andreou, got down to one knee asking his girlfriend to be his life partner in front of a gorgeous view of Eiffel Tower.

Andreou slipped the diamond ring on Steel's finger, and the lovebirds shared a kiss and cuddled up on a balcony overlooking the city following an obvious 'Yes' from Steel. The news comes just a week after Steel shared a photo of her and Andreou on her Instagram from the same balcony. 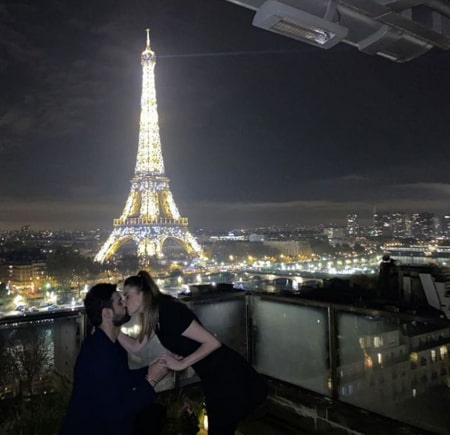 Carly Steel and Jacob Andreou cuddling up after getting engaged in front of the seraphic view of Eiffel Tower SOURCE: People

Steel, who is recognized for her stint on the 2015 film Mortdecai, made her relationship with her boyfriend turned fiance, Andreou in March 2019, in an Instagram post. At the time, she shared the photo of the couple from a football match of Los Angeles Lakers.

The couple went on a trip to Qatar the same month when Steel shared some snaps from their private moments, including from their desert safari. The trip was followed by their journey to Salzburg, Austria, and Saint-Tropez, France.

Meanwhile, Andreou's first social media post featuring Steel came back on August 21st, on the occasion of Carly's 32nd birthday. Then, the newly engaged called her "the girl who changed everything" while wishing her.