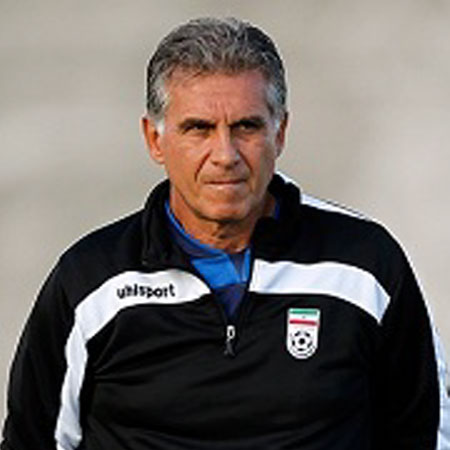 Carlos Manuel Brito Leal Queiroz is a controversial and eminent name in the list of football managers. Carlos Queiroz who qualified three national teams to world cup was formerly attached to Real Madrid and Portuguese national team as a manager and was also Sir Alex Ferguson’s assistant manager in the club Manchester United. In his football career, Carlos has managed many clubs and is currently involved in the club Iran national football team.

Born on March 1, 1953, in Nampula in the nation Mozambique. He had interest towards football in his early days and used to play the position of goalkeeper but he would give up his journey as a player and would turn to management later.

Queiroz graduated from the University of Lisbon and was the coach for Portuguese under-20 FIFA World Youth Championship in the 1989and 1991 tournaments.

Carlos did not survive as a football player thus he turned his career promptly towards managing. He moved to Portugal not long after his demolished footballer career and became a coach.

In 1984 Carlos was hired as an assistant manager to a Portuguese sports club Grupo Desportivo Estoril Praia. He trained the Portugal national under -20 team which turned out victorious in both 1989 and 1991 Football World Youth Championship.

From 1991 to 1993 Carlos managed the Portugal National football team where he delivered 14 wins in 31 matches which were phenomenal. Later in 1994, he started to manage the Premier League team Sporting Club de Portugal.

He trained the team for the main Portuguese national football knockout completion – Taca de Portugal in 1994 and also in a Portuguese football trophy contest – Supertaca Candido de Oliveira in 1995. He stayed in the team until 68 of their plays and on 18 July 1996, Carlos was assigned as a manager of the New York / New Jersey MetroStars in the U.S.

And subsequently in the same year became the coach of the Japanese team Nagoya Grampus which he left on May 7, 1997. Again 1n 1998 he returned to coaching national teams. On January 19, 1998, he started coaching UAE national football team and after viewing 16 matches Carlos left on January 18, 1999.

Carlos then became the coach of South Africa national football team from October 7, 2000, to March 30, 2002, where he qualified South Africa for the 2002 FIFA World Cup. But before the finals, Carlos resigned after a rift with the South African Football Association. Carlos joined the English Club Manchester United as an assistant manager to Sir Alex Ferguson in June 2002 but departed shortly.

Real Madrid was keenly observing Carlos’s work in Manchester thus on June 25, 2003, he proudly entered to Real Madrid with a two-year contract. Real Madrid topped the La Liga table and got in debate for the Spanish Cup and UEFA Champions League trophies but unfortunately, Carlos was kicked out on May 31, 2004, from Real Madrid when they lost their final five matches and came in fourth place which was below par for Real Madrid.

Carlos, however, sprung back to being an assistant manager in Manchester United on July 1, 2004, with a three-year contract. He was under various criticisms and controversies during his period in Manchester United. Although Alex Ferguson had wanted Queiroz to be his successor at Old Trafford, due to the former approach of Benfica wanting Queiroz as their manager, Carlos Queiroz was granted a discharge from his contract on July 11, 2008.

And thereafter Carlos was assigned the manager of Portugal national team from July 11, 2008, to September 9, 2010, where he encountered 28 matches. Under Carlos’s guidance, Portugal failed to win four matches in the World Cup Qualification campaign.

As a result, they were left with only 6 points out of possible 15 points which were discouraging. But fortunately, later Portugal advanced to the finals of 2010 FIFA World Cup. Portugal did exceptionally well by beating North Korea with a 7-0 win but in the second round got beaten up by Spain with 1-0.

Unfortunately, Carlos was dismissed by the Portuguese Football Federation on September 9, 2010. Controversy yet again followed Carlos when he was put on the brink by the Portuguese Anti-Doping Authority for six months indicted for disrupting an anti-doping testing session.

Soon after all the hustle on April 4, 2011, Carlos agreed a two and a half year contract with Iran national football team. Under the guidance of Carlos Iran reached the third round of the World Cup qualification. Iran later qualified for the final round after winning over Indonesia with 4-1.

They defeated Qatar with 1-0 and Lebanon with 4-0 and South Korea with 1-0 and ultimately became the third team that Carlos had succeeded in qualifying for the World Cup. Iran has thus qualified in the 2014 FIFA World Cup with 16 points.

The victory succeeded with them qualifying to the 2015 Asian Cup.  58 – year –old Carlos has a commanding body structure with height 178 cm, although the weight is unknown, and earns an annual salary of about the U.S. $ 2 million.

Carlos lately spoke to the media that he is a little miffed and is aggravated regarding the preparations of 2014 FIFA World Cup.

Carlos Queiroz was married to Ana Paula Queiroz, and blessed with two children; a son and a daughter together. Their son is Rogério Queiroz and daughter is Sandra Queiroz. Queiroz has managed to maintain privacy in regards to his family and nothing has been provided to the media regarding his family life.