One of the genuine reporters of the FOX News Channel (FNC's), Carley Shimkus is best known for reporting in 24/7 Headlines. offering on entertainment news and social media trends across the network's programming. She has also been the part of the politico-social discussion and satiric commentary show Red eye w/Tom Shillue. Shimkus was also a producer of Don Imus' radio.

Early Life, Parents, And Education Of The Carley Shimkus

Carley Shimkus was born on 7 November 1986 in Long Valley, New Jersey. She spent most of her early childhood days in her hometown Long Valley with her family. She belongs to American nationality and regarding her ethnicity, she is a White.

Shimkus is the youngest daughter of Zulma M.  Shimkus and Edward Shimkus. Her father and mother met in 1982 on a plane ride where the latter was a flight attendant while her father was a passenger. She also has one elder sister named Margot. She shares a close bond with her sister.

My parents met on an airplane in 1982. My mom was a flight attendant for United Airlines and my dad was a passenger. She jokes it would have been love at first sight if not for his polyester shirt. I also have an older sister who is an incredible artist and art teacher.

Shimkus graduated from Quinnipiac University with a Bachelor of Arts degree in Broadcast Journalism in 2009. Additionally, she was also a part of a selected group of students to join the George Washington University Semester in 2008. As Carley did her internship in Fox News in Washington, D.C during her junior year, she instantly joined Fox after her graduation.

Carley blessed with good looks, good height (5’10’’), and great physique also decided to build her career in modeling, however, later on, she realized that it required much more than great height and good looks to get success in modeling sector and quit the profession.

Because of my height, I figured I’d give modeling a try when I was in high school. It was a fun experience but not in the cards for me.

In 2008, Carley Shimkus worked as an intern at the D. C. bureau in 2008 before graduating from the University. She started working as a news reporter in 2009 and after 3 years of hardworking, she was promoted to Associate Producer at Fox Business Network. 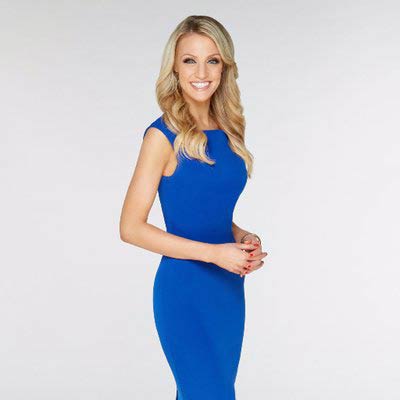 Shimkus also served as an assistant producer on Imus in the Morning, a radio show by Cumulus Media Networks where she conducts behind the scene interviews for imus.com website. She was also featured in 24/7 Headlines correspondent, Fox & Friends, Fox & Friends First, Media buzz.

On November 6, 2018, Shimkus participated in Fox News’ evening election coverage. The network hosted a viewing party outside its New York City headquarters. Early in the evening, Shimkus was stationed at “Fox Square,” speaking to voters as election results began to come in.

Carley Shimkus' Net Worth And Salary

Carley Shimkus' net worth is around $1 million at present. She has maintained such a decent net worth from her career as a news reporter.  As per the insider, her salary per annum is around $56 thousand which includes her basic salary and bonuses from the Fox News.

Shimkus has worked as an associate producer in Imus in the Morning. Prior to TV, she was once also worked in at least one advertisement for a costume store.

Also See, Tucker Carlson, Is One Of The Top Paid Reporters-How Much Is His Net Worth? Details Of His Income Sources And Assets

Carley Shimkus is married to businessman Peter Buchignani. The couple tied the knot on August 8, 2015, in an intimate wedding ceremony, in New Jersey. They met for the first time on Carley 23rd birthday and started dating officially in 2013. She announced her marriage on Imus in the Morning.

I met my husband, Pete, on my 23rd birthday. We got married in August, 2015 in my home state of New Jersey. ‎We are both diehard Michigan football fans and even walked out to the Michigan fight song on our wedding day. Go Blue!!

Carley's husband Peter has the Bachelors degree in Political Science from Princeton University. As of 2019, he is a sales analyst at Amherst Pierpont Securities. He previously worked for Barclays Investment Bank, a British multinational investment bank under the auspices of Barclays headquartered in London from 2009-11. He then worked for Deutsche Bank for three years before began working for Amherst Pierpont Securities.

I get to see my valentine tomorrow

Both the couple are the huge fan of Michigan football, that's why their exit song during their wedding was also of the Michigan fight song. The couple has also a few other things in common. She also had his college education in the same period as Shimkus (2005-09). The two currently resides in New York City.

Till now she and her husband are not involved in controversy. They are living a happy married life and there is no any rumors and gossips about their divorce and split yet. The two do not have any child.

Carley is also active on Instagram where she frequently shares pictures with her husband and colleagues. She has 50.7 K followers on her Instagram as of 2019. The couple seems much in love.

According to some sites, it is reported that media personality lost some of her weight after she maintained the diet as well as do regular exercises.