Can't Be Worse!! All-Stars Can't Hide Laughter As Fergie Put Her Spin On ''The Star-Spangled Banner" 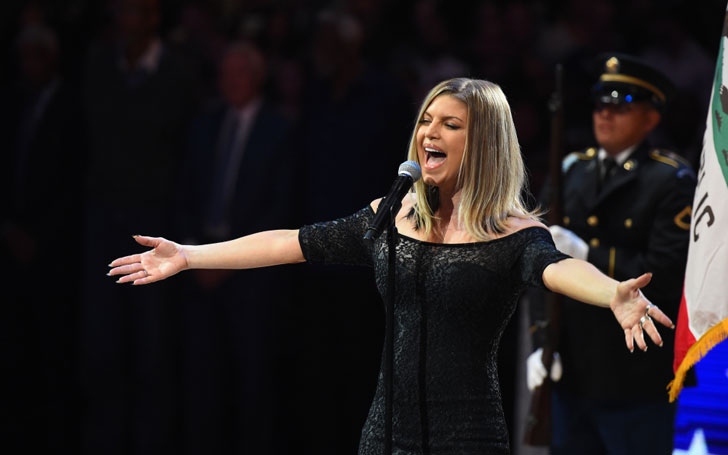 The Big Girls Don't Cry singer Fergie was honored to perform the National Anthem before the NBA All-Star Game Sunday Night-but even the NBA stars couldn't control their laughter as the singer messed up the Anthem.

The 42-year-old songstress has been mocked hugely on the social media for her rendition of the National Anthem at the Los Angeles' Staples Center.

The late-night host Jimmy Kimmel and other stars present in the stadium could be seen snickering while Fergie spun on the song and even the players were getting a few laughs.

Many viewers took to Twitter sharing their opinions after her singing where few Twitter handler called it the ''worst version of American National Anthem ever.'' One of the viewers wrote, ''please don't ever do the National Anthem again.''

Another viewer wrote, ''I've seen the national anthem performed hundreds of times but never in the key of ''Happy Birthday Mr. President'' congrats.''

Another user named Britni Danielle involved president Donald Trump in her aggression on Twitter after the anthem where she took one of the weird and funny snaps of president Trump.

Meanwhile, the Keeping Up with the Kardashian alum Khloe Kardashian also took to Twitter expressing her reaction over Fergie's ''Star-Spangled Banner'' where she wrote,

Thia All Star opening is confusing me. WTF is going on? Anyone?

The Team Lebron versus Team Curry battle was the first All-Star NBA match where the captains could pick their teams where LeBron James' team claimed the victory with a score of 148-145.