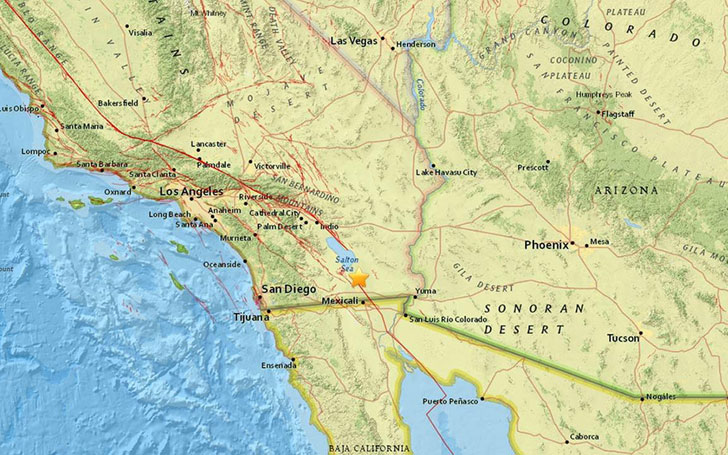 A shallow 5.8 magnitude earthquake has shaken the off coast of Northern California in early Thursday morning whereas more than five earthquakes, and aftershocks have been recorded by the early Friday morning, USGS reported.

The U.S. Geological Survey reported the epicenter of the quake was about 100 miles off Northern California's Lost Coast. The shock was reported in the Pacific Ocean west of Capetown at a depth of three miles at 8:39 a.m.

According to Express, ten earthquakes have hit California in a 24-hour period, with three earthquakes more than four Richter magnitude. A magnitude 2.7 earthquake reportedly hit 14 km south-east of the Mammoth Lakes while a magnitude 3.2 earthquake shook Stratford with the epicenter 2 km north-east of Stratford.

A geophysicist at the National Earthquake Information Center, Paul Caruso said the United States Geological Survey recorded a 5.1 magnitude aftershock around 9:30 in the morning. Caruso said,

The computers hadn't sorted it out. It happens. It's more common than we would like it to be. People may feel a little shaking, the chandeliers moving in the house. We wouldn't expect any severe damage.

Caruso also said the earthquakes in the ocean have been monitored by the tsunami warning centers and reassured the 5.8 Richter shock is ''not even close'' to strong to trigger a tsunami. Moreover, he said at least of 7.0 or greater earthquake can cause a tsunami.

Over a dozen of earthquakes measuring 2.5 or more magnitude have already hit California over the week. The scientists have warned more earthquakes might hit the country, specifically the southwest part in 2018.