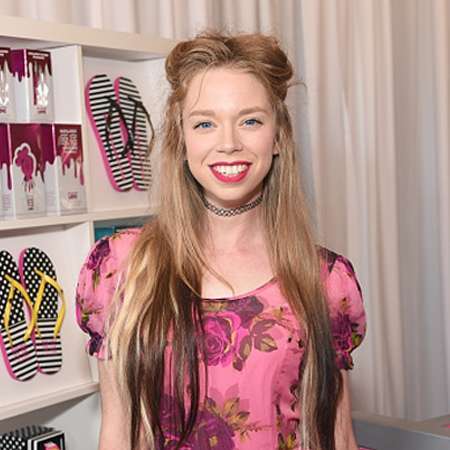 Rachel Bunny Meyer is one of the most paid YouTube personalities. She is famous for her YouTube channel grav3yardgirl. She started her career as a fashion designer and later became a popular YouTuber.

Her videos have been watched by millions of viewers all over the globe. She regularly uploads videos about fashion, make-up, design, and special vlogs. As of June 2018, her channel has 8.8 million-plus subscribers and 1.5 billion-plus video views. In 2014, she was nominated at the Teen Choice Awards for Choice Web Star: Fashion/Beauty. She was again nominated at the Teen Choice Awards in 2016.

Meyer was born on the 3rd of August, 1985, in Houston, Texas, the U.S under the birth sign Leo. She holds an American nationality belonging to the White-American ethnicity.

Born in Houston, Texas, Bunny had a troubled childhood as she got into a car accident. Before the accident, she used to design clothes but the accident left her unable to sew anymore.

After the car accident, Bunny Meyer started her YouTube channel in December 2010. Her videos mainly dealt with her own trips to the graveyards and the paranormal experiences she suffered from. After a while, however, she shifted her focus to subjects regarding fashion and beauty. She also focused her attention on makeup.

Bunny also created a series called Does This Thing Really Work, which is a series that deals with the reviews and use of things that are shown on television. Her success in the field of fashion and beauty has been incredible and she has over 700 million views on her videos of their channel.

Her YouTube channel has 8.8 million-plus subscribers and 1.5 billion-plus video views as of June 2018.

She is considered one of the most paid personalities on YouTube. Her success after her accident and her beauty and charm on-screen make her liked and respected by her fans around the world. She was also nominated for the Teen Choice Awards for Choice Web Star: Fashion/ Beauty in 2014.

THINGS TO DO IN TODAYS NEW VIDEO: ? ask yourself DOES THIS THING REALLY WORK ? take a sippy sippy ? 'admire' the over editing ? play a thrilling new game called 'bowl sponge bounce' ? help groot grow in the comment section! ? LEAVE A LIKE so more swamp fam members will see the video! LINK TO WATCH IS IN MY IG BIO!

In June 2016, she launched her Swamp Queen make-up collection in collaboration with Tarte Cosmetics. Her collection was sold at several leading cosmetics stores, such as Macy’s Ulta and Sephora, and included an eyeshadow palette and two lipsticks. But, Tarte’s website crashed just after the release of the products due to overwhelming traffic.

Owing to her huge success of YouTube from her channel, she has been liked a lot and her bio and images have been searched by millions of her diehard fans around the world.

Furthermore, her works helped her to get nominated for the Teen Choice Award in the category of Choice Web Star: Fashion/ Beauty but lost to Zoe Sugg. In 2016, she also received the second nomination and again lost to Bethany Mota.

Bunny Meyer's net worth is $1.2 million. She makes money from her YouTube videos. As per some sources, YouTubers are paid $2-$5 per 1000 monetized views. So, her video views have crossed 1.5 billion as of June 2018, and a s suming that she has already made over $2 million from her videos.

Meyer also earns from her make-up collection which she released globally in 2016 in collaboration with Tarte Cosmetics. Her collections are sold at several leading cosmetics stores like Sephora, Ulta, and Macy's among others.

YouTuber Bunny Meyer is in a relationship with a guy named Dogman. She's been together with him for over three years now. But, she rarely makes an appearance with him in public events.

dogman & i had so much fun at dickens on the strand today even though i didn't have enough time to do my hair & makeup, we froze & drank too much soda  this is still my favorite outfit to wear every year!

She is active on social sites like Facebook and Instagram. She has 2.7 million followers on her Instagram as of June 2018. She regularly shares her ups and downs with her fans. She also travels to different parts of the world.

Her dating history and the people she previously dated have not been known about. She seems to be focusing more on her YouTube career as well as her boyfriend. The girlfriend-boyfriend couple is inseparable since then but is not married yet.